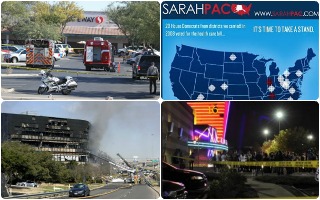 Alleged Los Angeles shooter Christopher Jordan Dorner, influenced by left-leaning media coverage of gun crime in the wake of the Newtown shootings, has virtually paralyzed the City of Angels. Floyd Lee Corkins, a gunman incensed by anti-gay marriage bias after reading articles by the liberal advocacy group Southern Poverty Law Center, took a firearm into the Family Research Council’s headquarters with the intention of killing “as many as possible.” He hoped to smash Chick-fil-A sandwiches in the faces of as many corpses as he could. These shooters were clearly moved by left-wing media, and we should thank every benevolent force in the universe that they were. Had either shooter possessed even a tenuous link to a conservative group, a media-driven hysteria about the malevolent influence of right-wing broadcasters and commentators would be gripping the nation today. Fortunately, when a crazed shooter’s ideology is explicitly and demonstrably left-wing, the media displays admirable restraint about linking a gunman’s politics to their acts of violence.

The instinct by many high profile voices in the media to link violence to right-wing politics is not a new phenomenon, but it has enjoyed a renaissance since the tea party began to achieve political power. The broadcasters who subtly implicated former Alaska Gov. Sarah Palin in the 2011 attack on a Democratic congresswoman in Tucson, Arizona, is indicative of this bias. CNN host Piers Morgan exemplifies the lamentable instinct to blame conservatism for senseless violence well.

In a November, 2011, interview with Mark Kelly, Morgan said he was shocked by the “extraordinary” fact that Palin did not reach out to former Rep. Gabby Giffords (D-AZ) immediately after the shooting. Kelly agreed, saying that the infamous map on Palin’s website which featured targets over a variety of congressional districts that Republicans were “targeting” in that year’s midterm elections – an infraction which sparked a national uproar about the martial imagery employed by politicians since the time of Demosthenes – was “not the right thing to do.”

The implication was clear: Palin had some influence on the crazed gunman who shot up an impromptu meeting of a Congresswoman and her constituents. Palin’s crosshairs map had become a scapegoat for prominent voices from Paul Krugman to Randi Zuckerberg. It did not take much investigation into Loughner’s background to learn that he was not especially political, and was certainly not a fan of Palin’s. Nevertheless, nearly a year after this tragic incident, Morgan clung to that baseless charge.

Since the Newtown shooting, Morgan has been beating the drum about the need for stricter gun laws. His pro-gun control crusade made a deep impression on Dorner, who praised Morgan in his manifesto. So, having been specifically cited as someone who influenced Dorner, Morgan would engage in some introspection. Instead, he dismissed his influence on the L.A. shooter outright.

Morgan tweeted confidently — just hours after the manifesto in which Dorner praised not just Morgan but MSNBC’s programming and a proposed Assault Weapons Ban – that politics has “nothing to do” with Dorner’s rampage.

Unfortunately, the spectacularly wrong-headed approach the media took to assigning nonexistent motives to Loughner did not lead the media to impose some restraint on itself when opining on the politics of crazed shooters.

After Aurora, Colorado, shooter James Holmes attacked moviegoers this summer, ABC News reporter Brian Ross – minutes after the name of the suspect had been leaked to the press – sifted through the white pages to discover that there was one James Holmes in Colorado who happened to be a tea party activist. That incident forced ABC’s President Ben Sherwood to issue an apology.

In February, 2010, when the deranged Joseph Stack flew his Piper Cub into the headquarters of the Internal Revenue Service in Austin, Texas, few in the elite media waited for the dust to settle before blaming conservatism. “The First Tea Party Terrorist?” asked New York Times columnist Robert Wright.

Even though Wright had Stack’s online manifesto in hand – one in which he praises Marxist communism and laments the harsh excesses of American capitalism – Wright used a magicians sleight of hand to nevertheless link Stack to the tea party.

Was he a Tea Partier — or at least a Tea Party sympathizer? Conservatives who say no point to leftish themes in his manifesto. And it’s true that — in a line much-quoted by these conservatives — he seems to wish that the government would do something about health care. Then again, who doesn’t?
…
In the end, the core unifying theme of the Tea Partiers is populist rage, and this is the core theme in Stack’s ramblings, whether the rage is directed at corporate titans (“plunderers”), the government (“totalitarian”) or individual politicians (“liars”).

When the facts make it impossible to indulge the instinct to link a violent extremist to the right – in Dorner and Corkins’ cases for example – the media displays appropriate caution about assigning political motives to their actions.

That is an laudable impulse. The motives that drive disturbed individuals to commit heinous acts of violence, whatever they are, should not be glorified. Dorner’s manifesto clearly indicates that the media, and its coverage of the gun control debate that has followed the Newtown massacre, influenced him significantly. A responsible media would take that into account and maybe, just maybe, ask what they may be doing to contribute to the increased incidences of mass shootings.

That is a national conversation that Americans deserve. Rest assured, if Dorner or Corkins had been influenced to commit their crimes by right-wing media outlets, we would get it. Sadly, that level of self-awareness is nowhere to be found in today’s media landscape.