Where to Watch the Nevada Caucus Results by Network 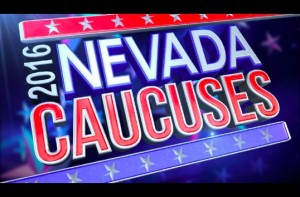 Former Secretary of State Hillary Clinton and Vermont Senator Bernie Sanders head into their third state vote today, having split the series so far 1-1 in Iowa and New Hampshire. The Democratic party turns to Nevada this weekend, and each candidate is hoping for a decisive victory to gain momentum heading into South Carolina next week.

All of the cable news networks will be covering election results out of Nevada throughout the day and night.

Fox News Channel’s Bret Baier and Megyn Kelly will coanchor America’s Election Headquarters from 7PM-10PM/ET Saturday. Other Fox News programming throughout the day will focus on Nevada returns, the South Carolina Primary where the Republicans are battling it out, as well as the funeral of late Supreme Court Justice Antonin Scalia:

MSNBC’s “Place for Politics” will be broadcast live from Nevada as well, with Chris Matthews anchoring live from Las Vegas for the Nevada Democratic Caucuses. On the ground in Nevada, Chris Jansing will contribute to coverage of the caucus with Chris Hayes and Jacob Soboroff reporting live from caucus sites. Kristen Welker will be with Hillary Clinton’s campaign and Katy Tur will be with the Bernie Sanders’ campaign in Nevada.

Fox Business Network will present special coverage of the GOP South Carolina Primary and Democratic Nevada Caucus on Saturday, February 20th. Starting at 6PM/ET, Lou Dobbs will kick off the coverage with a special edition of Lou Dobbs Tonight. FBN’s Neil Cavuto will then host a special edition of Cavuto: Coast to Coast beginning at 6:58PM/ET with coverage and analysis as the results come in. Cavuto will be joined with business leaders and political experts throughout the evening while reporting on the results.