White House Out Of Control: In Targeting Woodward, Team Obama Reeks Of Desperation

White House Out Of Control: In Targeting Woodward, Team Obama Reeks Of Desperation 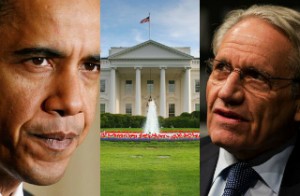 When a senior White House official resorts to threatening such a respected figure in journalism like Bob Woodward, all members of the journalism community–right/left/center–should find it unsettling.

If he or anyone in media can’t do his or her job without attempting to be intimidated by a government official, we’re in deep trouble.

Sure, the “threat” isn’t something out of the Paulie Walnuts playbook, but what appears to be a disagreement between two longtime major players inside the Beltway. The “regret” comment followed senior White House aide Gene Sperling’s petulant 30-minute temper tantrum to Woodward about getting it wrong on the President coming up with the idea of sequester.

The context of the emails between Sperling and Woodward appear relatively cordial, but it still isn’t known what was said in that unpleasant half-hour conversation prior. And Woodward seems particularly fixed on Sperling’s choice to insert the word “regret” into the email. If Woodward takes exception to that particular word, it’s not up to anyone else to decide how he should feel about it. Certain words or phases are benign to some, toxic to others…it’s all subjective.

In terms of who has their facts wrong, it was Woodward who spent months compiling material for his unflappable best-selling book, The Price of Politics, which includes in-depth interviews with everyone from John Boehner to President Obama to every major player involved in the failed 2011 Fiscal Cliff negotiations. So in the case of the President’s word vs. Woodward’s notes on the sequester, I’m still going with the guy Bob Schieffer called “the best reporter of our time.” No one has been trusted enough to be granted the level of access he’s been afforded. According the New York Times book review, “No reporter has more talent for getting Washington’s inside story and telling it cogently.”

Woodward is unlike, say, his Washington Post counterpart Ezra Klein, who moonlights as an MSNBC host when he isn’t challenging Mr. Woodward on the very facts he compiled from interviews and minutes for his book.

Klein is being used here as an example in an effort to highlight the differences between a writer/cable news host, who presides over programming that largely depends on myopic opinion, noise and presenting an argument that fits a general narrative of a network, and a seasoned reporter not looking to become a TV star on an ideological program.

Klein is a rising star at MSNBC—was once even rumored to be getting his own show—because he follows the rules of advocacy journalism without fail. Woodward, conversely, is a reporter without an agenda to advance or narrative to conform to. He has no cable show. He’s isn’t even a contributor on any network. He can be found on CNN, Fox or MSNBC with centrist, conservative or liberal hosts at any time, but only as a guest. Never raises his voice, never makes blind guesses on what may be going on with a particular situation.

Instead, he reports based on meticulous detail around the topic at hand via interviews he’s done with people closest to the situation and recordings of meetings behind closed doors. It’s what used to be called reporting. And he gains access to such sensitive discussions because he’s trusted by members of both sides of the aisle.

Twelve #1 Best-Sellers and multiple Pulitzers back up all of these accolades.

So when Woodward challenges the President on “moving the goal posts” on the sequester by adding tax increases to the conversation when revenue was never part of the original agreement with Republicans that focused strictly on spending cuts, or when he says the sequester was Mr. Obama’s idea after the President says it wasn’t, logical people—those without blind allegiances or aren’t willing to debate without attacking the messenger—believe Woodward. They believe based on a lifetime record of telling nothing but the truth based on what he witnessed, wrote and recorded via extraordinary access.

Being publicly contradicted by Woodward is unfamiliar territory for some members of the Obama Administration, who aren’t used to getting the kind of retort they received from him this week. They’re also not used to not being able to simply demonize the opposition via its friends in the media, some of whom are now former senior officials.

That’s because Woodward is unlike any target they’ve tried to knock down before. This isn’t Sean Hannity going on a daily anti-Obama rant, it isn’t Rush Limbaugh doing the same. It isn’t Trump or a Breitbart writer or anyone else where the messenger could be dismissed a teabagging wingnut.

So apparently the only option left is to threaten the 69-year-old in an oh-so-2013 way: via email! It’s amazing how brave allegedly mature adults can act behind a keyboard.

The threat to Mr. Woodward by a senior Obama Administration official for contradicting the President read this way:

“But I do truly believe you should rethink your comment about saying saying that Potus asking for revenues is moving the goal post. I know you may not believe this, but as a friend, I think you will regret staking out that claim.”

The response from some on the left has been either to cast doubt that such a threatening email even exists (it has since been released) or laughing at Woodward for being too sensitive. The former makes perfect sense, because, you know, Woodward has been caught fabricating documents since that whole Watergate thing. Of course he’ll lie in this situation and in the process, put 40 years of being Washington’s most respected figures just to align himself with a party (that he’s hardly been a friend to) on the sequester. As for being too sensitive, the same people makng that claim would be in full hysteria if a very senior official from a Republican administration had sent the kind of “regret” email to, say, Rachel Maddow. It’s the usual hypocrisy.

For the first time since the President’s first debate with Mitt Romney, the Team Obama PR offensive is on the defensive because (without the usual filter) they can’t control the message. They sound desperate, look foolish, and simply can’t process that any member of the press who isn’t considered right wing would actually have the brass to refute them, particularly on such an important topic such as the sequester.

In the end, Woodward dismissed the threat…called it the stuff of cartoons.

But thanks to one of last honest men of the Fourth Estate, it’s now one of the President’s men who is looks like Wile E. Coyote chasing a Road Runner he’ll never catch.