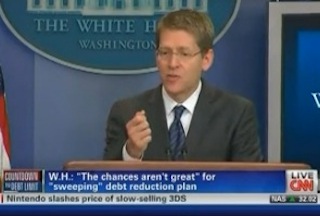 One of the more fascinating subplots to the ongoing news narrative surrounding the debt crisis debate is the now daily tête à tête during the White House press briefings between Fox News correspondent Ed Henry and Press Secretary Jay Carney. Today’s episode avoided the past accusations of cable news bias, but still delivered some entertaining moments, most notably Carney’s assertion that the House GOP wants to “stick the president with default,” which he deemed to be “incredibly juvenile.”

While Carney certainly makes a valid point that some of the rhetoric involved in this discussion has been sophomoric at best, it’s not necessarily fair to say that the Republican side of the House has been the sole participants in a game of immature dialogue (Speaker Nancy Pelosi‘s recent comment of “trying to save life as we know it on the planet” from the GOP bill comes to mind).

That said, while there is still a significant difference of opinions from both GOP leadership and the White House, it is not unfair to say that the Obama administration has thus far shown more willingness to compromise on a way to solve both the debt crisis and deficit spending. And if it appears that there is frustration from the administration about the current resolution, it might be because there is fear that the GOP is winning this round of crucial negotiations.

Put another way, perhaps a fed up President Obama is simply saying “let the babies have their way,” which sort of appears to be the case.