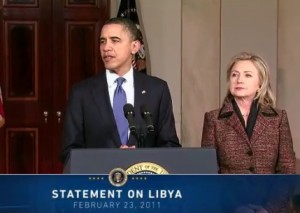 Reaction to President Obama‘s Wednesday remarks on the situation in Libya was roundly negative, characterized by Chris Matthews and panel’s suggestion that the statement was “weak.”

Earlier today, White House officials explained the calibration of the President’s statement to ABC News’ Jake Tapper, comparing it to a hostage negotiation.

The analogy that Tapper’s sources paint has disturbing echoes of the tragic end of the 1993 siege on the Branch Davidian compound in Waco. From Political Punch:

Officials analyzing Moammar Gadhafi’s rambling speech are concerned that the Libyan strongman is so untethered to reality he may “burn down the house with him,” as one put it, putting the Lybyan people — and hundreds of Americans — at risk, and prompting President Obama to carefully calibrate his words.

Tapper goes on to elaborate on what his sources told him, and it’s worth a thorough read.

This kind of Monday morning quarterbacking is nothing new, and it is a free country, but in situations like this, administration critics really ought to weigh considerations as obvious as these. Surprisingly, while a Hardball panel that included David Corn failed to do so, Ed Morrissey of the conservative blog Hot Air actually did, although they threw in some craven political calculation, as well: (emphasis mine)

The White House has a worst-of-all-possible-worlds scenario unfolding in Libya as it concerns Americans trapped in the country.  Until the US can safely get Americans to Malta or anywhere else — even Egypt and Tunisia don’t look bad at the moment — Obama can’t afford to provoke either side into attacking Americans, at least not if Obama thinks he will get blamed for any violence done to them.  The last thing Obama needs is yet another evocation of the Carter presidency with a long, drawn-out hostage crisis in a radical Islamist state.

So it’s understandable that Obama has tempered his reaction in this case with that context in mind. But even so, here’s a better question — why didn’t the White House start evacuating Americans from Libya when Egypt erupted into political chaos?  Did no one think that the uprisings just might spark a rebellion against one of the more brutal dictators in the region?