White House’s Jay Carney: It Would Be A ‘Welcomed Development If The President Were Able To Legislate’
video

White House’s Jay Carney: It Would Be A ‘Welcomed Development If The President Were Able To Legislate’ 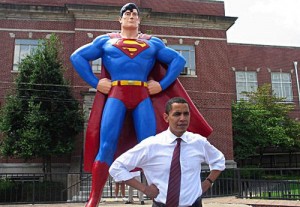 With all of the wrangling over the latest doomsday device set in motion by Republican hostage politics, the upcoming sequester deadline, sometimes the simplest solutions are the easiest to overlook. Rachel Maddow wondered, Wednesday night, why Congress doesn’t just repeal the Budget Control Act. At Thursday’s White House press briefing, Audio-Video News’ Connie Lawn asked Press Secretary Jay Carney about an even simpler solution: “Isn’t there anything (the President) can do by executive order at this point to stop sequester?”

“With all the President’s powers,” Lawn asked, “isn’t there anything he can do by executive order at this point to stop sequester?”

“It would certainly be a welcomed development if the President were able to legislate,” Carney replied. “Unfortunately — at least in this case — unfortunately, that is not a power that the President has, and it is up to Congress to act.”

“Congress chose to write the sequester into law with overwhelming support from Republicans because it felt that the sequester would be so onerous as an outcome that it would never come to pass. Congress is responsible for making sure it does not come to pass,” he added.

“The President has provided, again, a series of proposals for how to eliminate the sequester; ensure that its effects are never felt by middle-class families across the country; and that those proposals represent real compromise, they represent the balance that, as we see again and again in surveys of public opinion, the American people strongly support. Unfortunately, thus far, we have seen from the Republicans intransigence and a seeming desire to flout the American people’s will here and to allow the sequester to take effect, and that’s unfortunate,” concluded Carney.

“He can’t legislate,” Lawn said, “but can’t he mandate at this point?”

“It’s, unfortunately, in this case, not in his power to eliminate the sequester,” Carney said. “Congress needs to pass a law.”

What’s funny about this exchange is that Congress, particularly Republicans in Congress, have chosen to give this President powers that make stopping the sequester look like Aquaman stuff. Even as they complain and second-guess the counter-terrorism drone program, Congress has shown little inclination to actually do anything about it. I love it when Republicans cry “Tyranny!” about light bulbs, but show no inclination to repeal the Authorization for the Use of Military force.

Maybe the answer is to declare that there’s a “war on sequesters.”