Writing for Mediaite is the best. It involves watching cable news and scrolling through an infinite selection of lists on TweetDeck to find the best stories at the intersection of media and current events. One person has blended those two elements seamlessly. He is an inspiration to everyone at Mediaite and beyond.

That person is intrepid journalist, Peanuts fan, and all-around entertainer Jake Tapper and he has the best Twitter of any news personality. I mean, his bio on the microblogging site includes this:

Dissecting my tweets with Talmudic meticulousness will result in wrong conclusions.

His tweets are just as good. Look!

He interacts with people fearlessly…

@micah_micahk you should watch the interview i did w Clinton friday. bye!

…and graciously, depending on the situation:

He keeps us on track by always reminding us when Friday comes around:

He keeps his followers very grounded:

Spoiler alert: We all are RT @Slate: Is Don Draper going to die: http://t.co/SUnUvKfCMP pic.twitter.com/acOvo6xaxx

He has a public rapport with other celebrities:

I regret to inform you that @mindykaling is correct: I have an enormous noggin. Herman Munster-esque. https://t.co/mwyxChlfos

He has a sense of humor, even — and especially — about serious political issues:

“I believe if you check the record you’ll see that the previous administration approved Alderaan for relocation.” pic.twitter.com/0gtdSycqNY 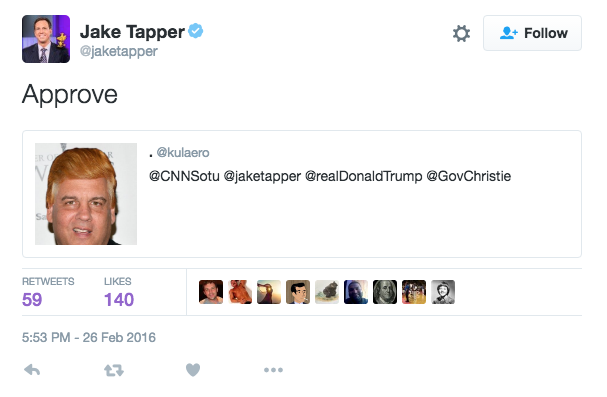 Still, he is serious and compassionate when it counts and uses the website for good to prove it:

A donor will give to @BobWoodruff‘s foundation for veterans @Stand4Heroes every time someone tweets or RTs this:#Give2veterans

Twitter greatness isn’t a new thing for Tapper, either. He’s been doing this for a while:

Hopefully, he keeps it up for a long, long time. We will surely need more self-awareness and humor as the current election wears on.

Go to his account and see for yourself. It is brimming with treasures.