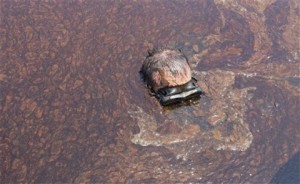 Some people lay face-down in shark infested water with a tube strapped to their head and call it snorkeling. AP reporter Rich Matthews does essentially the same thing, but instead of sharks in the water there’s oil, and instead of snorkeling, he calls it investigative reporting.

In an attempt to get the general public “to see the spill in a new way, a way they haven’t yet,” Matthews jumped from a boat parked 40 miles from land in the Gulf of Mexico and directly into a patch of thick red oil. To make him seem even more Evel Knievel-y, he did so completely alone – the other divers on his team refused to dive without the protection of a Hazmat suit, which Matthews was brave (or stupid) enough to forfeit.

And what did he find during this daring journalistic feat? Well, oil:

“Dropping beneath the surface the only thing I see is oil. To the left, right, up and down – it sits on top of the water in giant pools, and hangs suspended fifteen feet beneath the surface in softball sized blobs. There is nothing alive under the slick, although I see a dead jellyfish and handful of small bait fish.”

After snapping a few underwater pictures, he swam back to the boat, only to make another uncomfortable discovery – oil sticks to things:

“The oil is so thick and sticky, almost like a cake batter. It does not wipe off. You have to scrape it off, in layers until you finally get close to the skin. Then you pour on some Dawn dishwashing soap and scrub.”

You have to admit, the dive took a lot of chutzpah. But overall, it turned out to be a valiant effort that produced results everyone already knew: there’s oil in that oil spill, and as evidenced by the devastatingly unsuccessful animal cleanup process, the stuff is really hard to wash off. Except now you might have an easier time imaging how the pelicans feel.