Who Really Believes That Christine O’Donnell Dabbled in Witchcraft?
video

Who Really Believes That Christine O’Donnell Dabbled in Witchcraft? 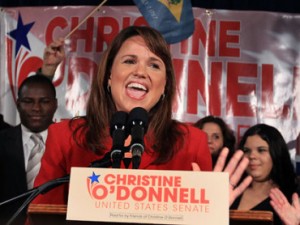 In the now-infamous Bill Maher clip, O’Donnell, after protesting “I’m not makin’ this stuff up,” describes an early date with a witch. In a touch that sounds like it came from an old Addams Family script meeting, O’Donnell says she went out to a movie, followed by a “midnight picnic” on what she later learned was a “Satanic altar.” She does not, however, recall getting a moontan.

Leaving aside O’Donnell’s cartoonish description of the date, the idea that a witch would bring her to a Satanic altar is as plausible as a Catholic taking someone on a date to a Mormon church pew. It’s not that it’s impossible, it just makes no sense. Wicca and Satanism, as a Wiccan opponent of O’Donnell points out, are not compatible.

Also strange is her claim that the date took place on a Satanic altar “but I didn’t know it, and, I mean, there’s little blood there and stuff like that,” which begs the question of just what she thought all the blood and stuff was for.

In case you missed it the first thousand times, here’s the relevant clip from Bill Maher‘s Politically Incorrect, circa October, 1999:

Since Maher released the clip, O’Donnell has deftly parried the clip with humor, joking that if she really was a witch, she’d have cast a spell over skeptic Karl Rove, and promising supporters that there has been “no witchcraft since then.”

It seems amazing that an emerging conservative superstar could firmly confess to having been a witch, and yet continue to count on support from social conservatives, but as Bill Maher points out, the redemption of the hopeless sinner is one of the most compelling facets of evangelical Christianity. In fact, the relative heinousity  of the sinner’s early life has a direct relationship to the impact of that redemption: the bigger the sinner, the greater the salvation.

O’Donnell’s revelation is particularly reminiscent of the conversion testimony of Christian comedian Mike Warnke. Among evangelicals, Warnke’s story is the Citizen Kane of coming to Jesus, or at least it was. He became famous for being a former drug-dealing, Satanic High Priest, and was often cited as an expert on Satanism, even by law enforcement. The problem was, he made it all up.

Warnke’s lies were useful on a number of levels. Not only did his claims of Satanism burnish the story of his redemption, but it allowed him to define Satanism based on nothing more than his imagination, and the expectations of a fearful public.

Warnke was undone by an expose´ in the Christian magazine Cornerstone, who also outed Laurel Rose Willson, aka Lauren Stratford, a woman who famously claimed to have bred babies for Satanic human sacrifices. Willson later claimed, falsely, to be a holocaust survivor as well.

Christine O’Donnell’s Politically Incorrect appearance, it should also be noted, came on the heels of the release of The Blair Witch Project, the culmination of a decade that saw witches attain the kind of sexy teen cachet now reserved for mopey vampires. Her “confession” was not just sensational, it was topical.

The mere fact that Warnke and Willson were liars doesn’t mean that O’Donnell is, but the inauthenticity of her story makes it a fair question. Unfortunately, the right seems happy with O’Donnell’s tale of redemption, and the left would rather she be a kooky witch than a bad teenage liar.

While everyone seems happier to gloss over the issue, wouldn’t it be a wonderful inversion of history if, in order to retain support from social conservatives, O’Donnell had to produce proof that she was a witch?