GOP Pledges To America To Become The Official ‘Party Of Undo’ 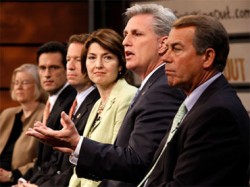 Today the GOP leadership made a big to-do about unrolling their ‘Pledge to America’ this morning. They staged a big presser in front a a hardware store in Virginia (presumably a place where real Americans work) that was sadly preempted by Obama’s speech at the UN (in the future this might be helpful).

So, in case you missed it, here is what the GOP is promising you America.

“With this document, we pledge to dedicate ourselves to the task of reconnecting our highest aspirations to the permanent truths of our founding by keeping faith with the values our nation was founded on, the principles we stand for, and the priorities of our people. This is our Pledge to America.”

You can read the deets of how this is going to happen here. Basically, amidst of bunch of campaign talking points, and requisite mentions of the Constitution, they would like to make the Bush tax cuts permanent, repeal Health Care, cancel the Stimulus, repeal government control of Fannie and Freddie, and forget about immigration reform along with the closing of Gitmo (“We will prevent the government from importing terrorists onto American soil”). Essentially a lot of details leading to the conclusion that should they take the House in November they will become the Party of Undo. And Congress will remain a place of gridlock and animosity.

The reaction thus far has been mostly meh. With a couple of exceptions. Andrew Sullivan thinks it is “the most fiscally irresponsible document ever offered by the GOP.” Erick Erickson thinks it’s “pablum“:

Yes, yes, it is full of mom tested, kid approved pablum that will make certain hearts on the right sing in solidarity. But like a diet full of sugar, it will actually do nothing but keep making Washington fatter before we crash from the sugar high. It is dreck — dreck with some stuff I like, but like Brussels sprouts in butter… Overall, this grand illusion of an agenda that will never happen is best spoken of today and then never again as if it did not happen. It is best forgotten.

Ezra Klein thinks they are just making their own lives harder:

Their policy agenda is detailed and specific — a decision they will almost certainly come to regret. Because when you get past the adjectives and soaring language, the talk of inalienable rights and constitutional guarantees, you’re left with a set of hard promises that will increase the deficit by trillions of dollars, take health-care insurance away from tens of millions of people, create a level of policy uncertainty businesses have never previously known, and suck demand out of an economy that’s already got too little of it.

Watch the report below.