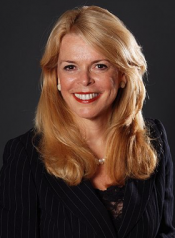 James Fallows isn’t being subtle about pointing the finger at Betsy McCaughey: A huge photo on his blog leaves no room for error about who’s to blame for the “Death Panel” rumors. Neither is the New York Times, singling out McCaughey on the front page for derailing the health care debate with pernicious rumours. Again.

Who is Betsy McCaughey? Fallows explains:

In the early 1990s McCaughey single-handedly did a phenomenal amount to distort discussion of health-care policy and derail the Clinton health bill. She did so through an entirely fictitious argument about what the bill would do. You can go back in the records here, here, and here, but the issue boils down to this: She claimed that the bill would make it illegal to go outside the government plan for coverage or pay doctors on your own. If a doctor took money for such outside-the-system services, she said, that doctor could go to jail. That was a flat-out lie.

…McCaughey has been at it again this year — twice, in fact. First was with an early, equally false claim that to compile “comparative effectiveness” data about medical care — which drugs had which effects, which surgical procedures led to which results, the sort of data collected routinely about education, air safety, and everything else — would lead to a Big Brotherish intrusion on individual medical decisions. That one seemed to get knocked out of contention fairly early. Then she was back with the “death panels” argument.

The New York Times today traces how McCaughey’s claim has been picked up by the conservative media:

But Ms. McCaughey’s article provided another opportunity for others to raise the specter of forced euthanasia. “Sometimes for the common good, you just have to say, ‘Hey, Grandpa, you’ve had a good life,’ ” Mr. Beck said.

Fallows says he can’t believe that this time around, the modern media, with its millions of Internet fact-checkers now built into the process, wasn’t immune to this kind of rumormongering. Well, it’s not because they weren’t warned: On July 29th, Greg Sargent‘s Plumline carried this headline: Figure Who Helped Kill Health Care With Distortions Last Time Rides Again (I just saw this via Andrew Sullivan, whom I checked as soon as I made the McCaughey-New Republic connection. Alas, he has not weighed in on this just yet. Hmm.) On July 31, Salon’s Joe Conason wrote “Will Bill and Betsy Kill Again?“, incredulous: “Knowing what we have since learned about him and her, it is hard to believe that anyone believes anything they say. But once again it is their words — brimming with falsehood, stupidity and possibly both — that inspire the opposition and confuse the public.”

It’s not that the fact-checking isn’t there – Conason traces the McCaughey ‘end-of-life counseling’ rumor back to mid-July on Fred Thompson’s radio show, saying “the healthcare reform bill would make it mandatory — absolutely require — that every five years people in Medicare have a required counseling session that will tell them how to end their life sooner.” Conason points out that Politifact.com debunked this as a “ridiculous falsehood.”

But debunking takes time and effort, especially when rumours spread.  Wednesday, Time’s Michael Scherer pointed to how McCaughey’s fallacious New York Post column attacking Ezekiel Emanuel, brother of Rahm, as a “deadly doctor” had spread like wildfire, catching him off-guard. Guess who wrote the column? Look no further than the smiling blonde above.

Paul Krugman’s column today, “Republican Death Trip,” doesn’t even mention McCaughey — it’s about Chuck Grassley‘s role, which he calls “flat-out despicable.” But the hand of McCaughey is behind Grassley, too (no matter how much he may claim that he’s “no nail“):

The truth is that the factors that made politics so ugly in the Clinton years — the paranoia of a significant minority of Americans and the cynical willingness of leading Republicans to cater to that paranoia — are as strong as ever. In fact, the situation may be even worse than it was in the 1990s because the collapse of the Bush administration has left the G.O.P. with no real leaders other than Rush Limbaugh.

It also may be worse because this message machine has so many more amplifiers: Blogs and Twitter and YouTube and Drudge and HuffPo and 24-hour cable news shows who shout first and fact-check later. It’s a multi-media many-headed Hydra, and as anyone who knows a little mythology (or has read Agatha Christie!) knows, it’s bloody impossible to contain because as soon as you cut off one head, up spring two more.  That’s how it is with debunking these rumors: They are carelessly thrown out, exaggerated and amplified, and why not? It’s the other side that wil have to go through the laborious process of fact-checking and proving why they’re wrong, using up precious time and labor to do so.  Do you think all the people who watched Glenn Beck’s crazy eugenics segment instantly rushed to their computers to fact-check him? Er, not quite. Probably more than a few of them rushed to make hand-held signs that they could then wave angrily at a town hall. For the TV cameras.

So: Now what? The New Y ork Times is (now) on the case – will that make the Washington Times recant? Stop publishing McCaughey? We all know the answer: It won’t. Which is too bad, because anyone who knows a little mythology knows, too, that that’s the only way to stop it. The next best thing may just be to keep vigilant eye out at all time, and never to assume fact-checking is the end of it. It should be, but as long as the world prefers many shouting Hydra heads to a smoldering dead one, the second side will always have to shout back, belatedly. No Exit, indeed.

Related in depressing posts from back in February:
Let’s Stop This Before It Goes Any Further [Jim Fallows – The Atlantic]