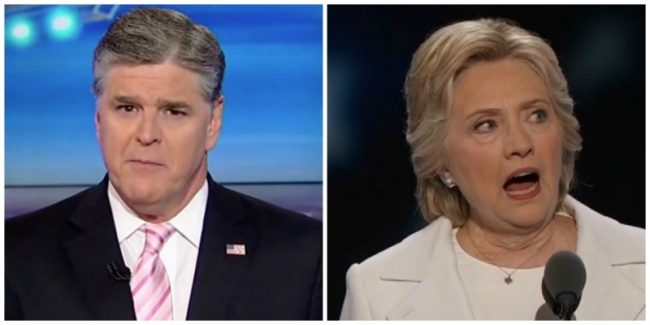 If you’re a regular viewer of Fox News’ Sean Hannity, you’d be forgiven if you thought Hillary Clinton was the President of the United States. And that poor Donald Trump was stuck on the outside of the White House looking in because Crooked Hillary used shenanigans to foil his election.

Yes, the conservative commentator and loyal Trump sycophant has decided to spend much of his TV air time these past few weeks hammering away at the now private citizen who surprisingly lost the presidential election nearly ten months ago. Someone who has little to no power right now on Capitol Hill nor in the Democratic Party at the moment. And he has done so in such a way to make it appear that the former Secretary of State is the one calling the shots in Washington.

Looking through Hannity’s transcripts since July 31st, he has devoted 141 minutes to just Hillary Clinton. (Mind you, this is just the past few weeks — he’s been doing this for months.) And he has done it in a variety of ways. He’s continued to bring up the 33,000 deleted emails. Uranium One? Of course. The Bill Clinton — Loretta Lynch tarmac meeting? That issue got a whole bunch of time, especially after the House Judiciary Committee voted to look into it and an article later came out stating some journalists were reluctant to cover the story.

And even in these recent days, when other events have pushed the Russia probe to the side in the news cycle — the story that has most hounded the Trump administration — Hannity has found ways to bring up Hillary in a negative manner. In the wake of the violence in Charlottesville and the subsequent debate about Confederate monuments, Hannity has linked the ex-First Lady to the KKK via former Democratic Senator Robert Byrd. And following the release of an excerpt of Hillary’s newest book, Hannity and guests had to dedicate some time to mocking her.

So, why can’t Sean quit Hillary? Because he needs a villain. He needs something to rail against. And that person has to be seen as someone who is in power.

Now, Hannity has focused a lot of energy on other enemies, notably the Destroy Trump Media and the Deep State. And while at times he’s tried to tie all three of these entities together as attempting to take down Trump, Clinton remains the evil figurehead that needs to be brought to justice.

This, of course, is all Hannity knows, and the business model on which his media career is built. There has to be a liberal power figure to oppose, one that is preventing conservatives from truly getting things done as they want. Someone who is destroying the country. Someone that Hannity needs to rally his audience against. It is a tried and true formula.

And let’s face it. Sean thought he’d have Clinton to program against for at least four years. After lashing out at Barack Obama for eight years, Hannity was all ready and waiting with his list of Clinton scandals to go all out against Hillary. It was all set up for him. He could continue to claim Trump would have done things differently and the country made a mistake while using each broadcast to hype up a new “controversy” that could spell the end of the Clinton administration.

Unfortunately, Trump got himself elected — and ruined it all for Sean.