Why Did 13 Hours, Michael Bay’s Benhgazi Film, Do Poorly in Opening Weekend?
video

Why Did 13 Hours, Michael Bay’s Benhgazi Film, Do Poorly in Opening Weekend? 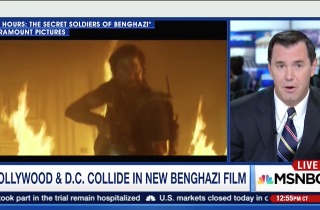 The success of movies like Lone Survivor and American Sniper in past years have proved that Hollywood films that attract a more conservative audience can do very well at the box office. The former grossed roughly $38 million on its opening weekend, while the latter grossed a little over $100 million. American Sniper instantly took the top spot of highest-grossing opening weekend in a January ever, beating out Ride Along.

So you would think that a movie about Benghazi (a subject tailor-made for conservative audiences to flock to), directed by the man responsible for the high-grossing Transformers franchise would do pretty well at the box office in its opening weekend, right?

Well, it turns out that Michael Bay‘s 13 Hours: The Secret Soldiers of Benghazi came in fourth at the box office in its opening weekend, making only $19.6 million. Ride Along 2 took the top spot with $41.5 million, followed by The Revenant and Star Wars.

So what happened? Well, Mediaite’s own Joe Concha appeared on MSNBC earlier this afternoon to discuss the politics of the film and said it probably had to do with the polarization of the whole subject.

If you’re a Republican, Concha said, and you hear about a Benghazi movie, you’re probably going into it expecting to have your opinions validated about Hillary Clinton and/or President Obama dropping the ball. And if you’re a Democrat, you probably avoided it altogether.

And while American Sniper was a big hit with conservative audiences, it wasn’t necessarily as polarizing a subject as Benghazi, which has been the subject of much argument in Congress, in hearings, and on the campaign trail.