Why Did Elizabeth Warren Suddenly Pivot to Praise ‘All’ Dem Candidates on Wall St. Reform?
Opinion

Why Did Elizabeth Warren Suddenly Pivot to Praise ‘All’ Dem Candidates on Wall St. Reform? 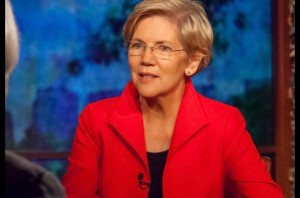 I’m glad @BernieSanders is out there fighting to hold big banks accountable, make our economy safer, & stop the GOP from rigging the system.

The support from Warren on its own would not strike many people as strange. The two candidates share a populist ideology over breaking up the financial institutions viewed largely responsible for the banking collapse of 2008; Warren’s own work as a prominent bankruptcy law professor led her to oversee a committee charged with the TARP bailout funds before her Senatorial career, and Sanders’ own Socialist policies are very well-aligned with Warren’s.

Couple that with the fact that to date, Warren remains the only Democratic female member of the United States Senate who has not formally endorsed Secretary Hillary Clinton for the Presidency, and you’re left with a picture that would strongly indicate a Warren-Sanders alliance of sorts. While Warren has been mum on offering an official endorsement for the Vermont Senator, her implicit support for Sanders is clear to Progressive Democrats and the far-left alike. Clinton, on the other hand, has been charged by Sanders as not being tough enough on big banks, and the Clinton-Wall Street connections continue to dog the Secretary on the campaign trail with increased volume from her left.

But something seems to have happened in the hour-and-a-half following Warren’s Tweet, perhaps facing pressure from within the Democratic party to clarify her sentiments to include the party frontrunner Clinton in her praise. 91 minutes later, Warren returned to Twitter to offer this cryptic update to her sentiments:

I’m glad that ALL the Dem candidates for president – @HillaryClinton, @BernieSanders & @MartinOMalley – are fighting for Wall St reform.

Warren is undoubtedly one of the most popular members of the Democratic party, and her unwillingness to declare an endorsement in the race has continued to face scrutiny. Warren herself faced immense pressure to toss her hat in the ring for the party nomination last summer, even earning a front page plea from The Boston Globe. The newspaper wrote in March 2015, “Democrats would be making a big mistake if they let Hillary Clinton coast to the presidential nomination without real opposition, and, as a national leader, Massachusetts Senator Elizabeth Warren can make sure that doesn’t happen.”

The eventual Warren endorsement will be an impactful windfall for whichever candidate receives it, and some have speculated that her unwillingness to outright support Sanders stems from the Vermont Senator’s outsider status, even in the wake of improved polling numbers. With Clinton, arguably, the likely nominee for the Democratic party (haven’t we had this conversation before?) it is doubtful that Warren would issue any language too harsh against the former Secretary of State. Regardless of her true support, on Wednesday it would appear that some external pressure seems to have influenced Warren’s rhetoric and approach, putting her in a position to clarify that “ALL the Dem candidates for President” are fighting the fight she most believes in (but really, only Sanders does).