Why I (Still) Love Nancy Pelosi 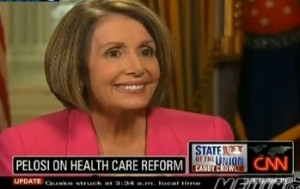 I met Speaker of the House Nancy Pelosi for the first and only time about a month before the 2010 mid-term elections. What struck me most was her smile. I don’t mean it struck me in the sexist, “my what a nice smile that female politician has” kind of way, as though the next thing I noticed was her shoes. I was struck that her warm and toothy grin, which I’d seen a million times on television, still managed to seem genuine mere weeks before her party’s predicted shellacking. Then I realized that she still has a lot to smile about.

Nancy Pelosi presided over the most effective Congress in my lifetime and, arguably, in generations. Don’t just take my word for it. Conservative congressional scholar Norman Ornstein called Congress under Pelosi’s leadership “one of the most productive Congresses in history.” And if you believe in the invaluable and irreplaceable role of our nation’s government to establish justice, insure domestic tranquility, provide for the common defense, promote the general welfare—as did our Founders—then you should welcome that news. For no matter how much greedy and bloated big business try to dominate every aspect of our economic, social and political life, Speaker Pelosi ensured government was a steadfast ballast for the public interest.

What did she do? Speaker Pelosi passed historic health care reform legislation that will provide insurance for 32 million uninsured Americans and, by doing so, reduce the costs passed on to all of us of providing care for the uninsured. Young people can now stay on their parents’ health insurance longer, and the insurance industry can no longer deny care due to pre-existing conditions. Pelosi also passed a vital stimulus package that independent economists agree has saved millions of jobs while staving off an even worse recession. The stimulus legislation also gave tax cuts to 95% of American families (though most Americans still don’t know that Pelosi and Obama cut their taxes). She ushered through financial reform to curb future economic crises, SCHIP legislation to provide health insurance to 11 million children, the Lilly Ledbetter Fair Pay Act to give women and other workers greater access to courts to fight workplace discrimination, and groundbreaking student loan reform that saves the government money while also streamlining loan access for millions of students. Not bad for 21 months of work. And really, those are just the highlights.

I’m not saying I don’t wish, like many progressives, that health care reform had included a public option, that the stimulus package would have been bigger and included more infrastructure jobs and that financial reform would have been even tougher. But considering what she did pass—and certainly compared with decades of destructive conservative policies that preceded her—it’s certainly possible to celebrate Pelosi’s great accomplishments while at the same time wishing they had been even greater.

And notably, Pelosi managed to achieve this historic legislation in the face of a historically divided Democratic caucus. Pelosi’s greatest obstacles in achieving some of the above victories came not from obstructionist Republicans but from conservative Democrats (barely) within her own party. With Democrats like Blue Dogs, who needs Republicans? Perhaps the shiniest of silver linings from the 2010 mid-term elections is that over half of the Blue Dogs, who were nothing but a thorn in the side of the progressive agenda in Congress and made a point of blatantly running against that agenda during the campaigns, lost their re-election bids. Despite the fact that the health care reform law would unquestionably help working class and rural poor folks in South Dakota, eastern Ohio and upstate New York, Blue Dog Democrats like Stephanie Herseth-Sandlin (SD-at-large), Zachary Space (OH-18) and Michael Arcuri (NY-24) voted against the bill.

It remains deeply mysterious to me why candidates from so-called red states and even red parts of blue states, all of which disproportionately benefit the most from federal policies that redistribute taxes and public infrastructure from the wealthier urban coasts, persistently grandstand against government assistance. There wouldn’t be any jobs in South Dakota without the taxes people pay in San Francisco. But rather than articulating the case for government, Stephanie Herseth-Sandlin played the parasite. In turn, she was voted out of office. Meanwhile, Nancy Pelosi was re-elected by her constituents—most of whom shoulder a disproportionate share of progressive taxation. In a generally gloomy election cycle for liberals, the gutting of the Blue Dog caucus was a pleasant bit of karma. Good riddance.

Of course, sometimes you can’t teach old dogs new tricks. Conservative Democrats who are now focusing their own crosshairs on Nancy Pelosi’s back should realize that Pelosi is the perennial target of the Tea Party right not because she has failed in her leadership, but because she has succeeded. Wobbly-spined Democrats should remember that the enemy of your enemy is your friend. Amidst fears that the disproportionately old, white and rich men that make up the Tea Party are not in fact a small fringe but represent conclusive evidence that liberal ideals are dead within the larger political mainstream, it’s worth noting that reactionary movements don’t arise in a bubble. They are by definition a reaction to progress.

The fundamentalist Christian anti-gay extremism surged in the 1990s in the wake of Will and Grace, Ellen Degeneres and men wearing more spandex in public. The Minutemen paramilitary border patrol groups and arch-nationalist anti-immigrant extremism surged in the last three years in response to historic marches by millions of undocumented immigrants and their allies and the near-passage of a path to citizenship. Despite all their rhetoric, the Tea Party did not emerge because Barack Obama and Nancy Pelosi were bungling their job leading the nation. The Tea Party emerged precisely because Obama and Pelosi were doing their job too damn well and elite, status quo interests were threatened. Democrats who now also turn their ire on Pelosi are helping the Tea Party win its narrative fight.

By comparison, someone like Blue Dog Health Shuler (NC-11) would NOT be a target of the Tea Party in part because he would be their lapdog, quarterbacking conservative economic policies that got us into this mess in the first place but whose repeated failure somehow eludes both conservative Democrats and Republicans who drank the same neo-liberal Kool-Aid—which was the only thing trickling down for the last few decades. The way to defuse the power of the Tea Party is not to dismantle the progressive opposition and further capitulate to Right wing ideas—just as, we now know, the best way to secure a governing Democratic majority in response to decades of Right wing onslaught was not to elect Democrat-In-Name-Only pragmatists willing to bend whichever the polls blow. I love Nancy Pelosi precisely because she stands for what is right, not necessarily what is universally popular.

Nancy Pelosi is a strong woman leader—never easy, certainly not in the old boys club of Washington—guided by the courage of her convictions that government is a necessary and beneficial force in our individual lives and the lives of our families, businesses and communities. History books will be more kind to Nancy Pelosi than mid-term voters have been. In the meantime, unlike John Boehner—who always looks like he just swallowed something bitter (foreshadowing the bitter future he’s bringing to America?)—I suspect Nancy Pelosi will keep smiling. And if she uses her new position as minority leader not to worry about wooing conservative votes in either party but instead stand even more firmly against corporate special interests and on the side of the best interests of all Americans, we’ll all have reason to smile. Her party and our nation will be better off. And in two years, she’ll be Speaker again.

Sally Kohn is a community organizer and political commentator focused on making the world safe for progressive ideas. She is a regular contributor to the Huffington Post, Fox News and AlterNet, among other outlets. Her writing and videos can be found at movementvision.org or on Twitter.