Why Is No One Saying Hillary Clinton’s Behavior Was Unacceptable?

Why Is No One Saying Hillary Clinton’s Behavior Was Unacceptable? 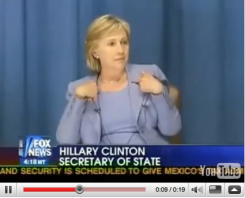 Two of the great media mavens of our time, Maureen Dowd and Tina Brown, both of whom share a fascination with all things Clinton, are weighing in today on Hillary Clinton‘s snap in the Congo, in wildly different, and surprising ways. Why does it seem that the press is willing to blame anything or one but Hillary, for her behavior.

Dowd, who was reprimanded last year by the Times‘ ombudsman Clark Hoyt for her “over the top” “gender twisting” campaign coverage, spends barely a third of her column addressing Hillary’s “I’m the Secretary of State” moment before moving on to the Town Hall debates raging across the country. Even in the third she does spend there is very little bite to her bark.

This raw, competitive response showed that the experiment in using the Clintons as a tandem team on diplomacy may not be going as smoothly as we had hoped; once more, as with health care, the conjugal psychodrama drags down the positive contribution the couple can make on policy.

That’s it? Wow. Yesterday I was pretty sure Hillary couldn’t have served up a more enticing tidbit for Maureen to tear apart than her I’m the boss remark. But where MoDo retreats Tina Brown attacks. And ever. This from her column at The Daily Beast today:

Madam Secretary was doing so well at grabbing back the spotlight, delivering hard messages to devious, corrupt African strongmen, issuing warnings to Somali militants, busting a move on the dance floor at a gala dinner in Nairobi. In Congo she was particularly stressed. She had spent a day touring a refugee camp, hearing harrowing stories of rape, persecution, and female subjugation, issues she has long made hers. I suspect she’d just about had it with having to tiptoe around so many big-dog male egos—Obama, Bill, Africa’s Messrs. Kibaki, Zuma, and Kabila. And p.s., was it necessary for Bill to be yukking it up on his birthday with the old adoring pals at such a fancy, high-priced restaurant as Craftsteak?

And not only that, but (and I say this in solidarity, not belittlement) the African humidity had wreaked havoc on her hair. It had gone all flat and straight, which puts any woman in a bad humor. (Let’s not forget: It was a sympathetic reference to the female-specific chore of keeping perfectly coiffed that made Hillary’s eyes fill with tears back in New Hampshire.) Plus, the grueling State Department schedule means these days she can never get to the gym

Really? REALLY? Hillary Clinton snapped at a Congolese student because she is annoyed at her husband and having a bad hair day? Actually, you know what? That’s probably true (being a woman is harder! Something Peggy Noonan pointed out last year). But does that make her behavior okay? It does not. And after an entire year of the press taking Clinton to task for behavior both made up and exaggerated why is no one just saying Hillary’s behavior was unacceptable.

Jezebel says that it’s the press’s responsibility to focus on the “actual issues at hand.” Yesterday that issue included Clinton addressing the brutal practice of rape as a tool of war. But you know what? Hillary Clinton has a responsibility to behave professionally in her capacity as Secretary of State, even (especially!) when lobbed inappropriate questions. And yesterday’s outburst was not professional, and would have been unprofessional regardless of whom it came from. Doubly so for a woman who, as Tina Brown so effectively points out earlier in the column, is accustomed not only to the rigors of the brutal schedule she is on but being in the public spotlight for half her life. Hillary has a responsibility not to distract from her larger agenda.

The truth is, Clinton should have had a better response to that question, and the fact the press honed in on the response she gave is not merely a measure of our cable news cycle but of the fact Clinton trails behind her an enormous American political legacy — and as such, is required to behave accordingly. Marriage analysis aside, the press should not be afraid to criticize when criticism is warranted.