Why is the Senate Filled With Decrepit Old People?
Opinion
NO COUNTRY FOR OLD MEN

Why is the Senate Filled With Decrepit Old People? 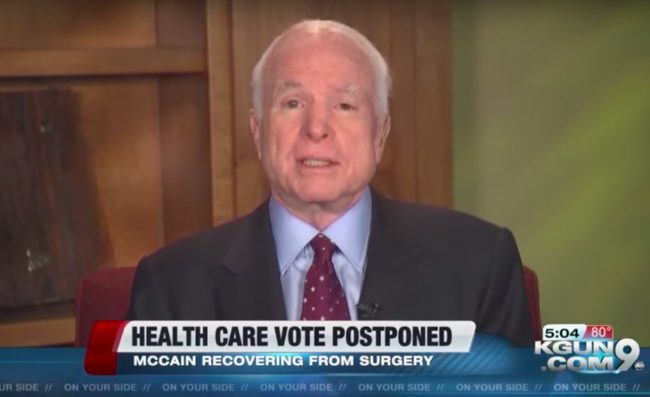 Over the weekend news emerged that Arizona Senator John McCain had undergone emergency surgery to remove a blood clot and would be out of commission while he recuperated. At first it was a week, but now his condition seems more serious.

McCain’s health might hardly have registered but for the fact that the sudden medical scare has forced GOP leader Mitch McConnell to delay a planned vote on the Republican Obamacare replacement bill. The cornerstone of the entire Trump legislative agenda now hangs in the balance because of the frail health of a single 80-year-old man.

Whether you agree or disagree with the health care law, this is pathetic. The business of the United States cannot be held hostage by entirely predictable health crises of a gaggle of elected fossils.

McCain is, of course, not an outlier. In fact, the octogenarian is only the seventh oldest U.S. Senator now serving, behind colleagues, Pat Roberts, Jim Inhofe, Richard Shelby, Orrin Hatch, Chuck Grassley and Dianne Feinstein. Feinstein, at 84, is currently first among geriatrics, but I think most of us are old enough to remember even more decrepit members in recent years like Robert Byrd and Strom Thurmond.

A quick Google search of “John McCain sleeping” reveals a myriad of examples that prove the point. After you get passed how amusing it is, take a moment to think about what would happen if your boss caught you sleeping on the job. John McCain, lest we forget, works for us.

It’s not just the specter of entirely predictable illness benching them at any given moment that should give us pause. The Senate Pro Tempore, an honorific title given to the longest serving member of the majority party, is almost certainly ancient and — bet you didn’t know this — is third in line to the presidency after the Vice-President and Speaker of the House.

When Strom Thurmond served as President Pro Tempore during his late 90s, I doubt most Americans would have wanted him behind the wheel of a car — let alone the steward of our nation’s nuclear codes. 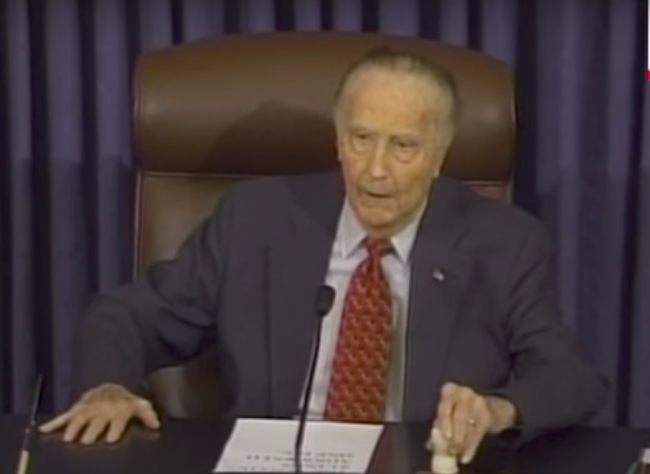 In a contemporary write-up, the New York Times called the image of a wheelchair-bound Byrd coming in for critical votes, a “poignant ritual”

“In what has become a poignant ritual during a fractious debate, Senator Robert C. Byrd, the 92-year-old Democrat from West Virginia, was pushed onto the Senate floor in his plaid wheelchair Wednesday afternoon. It was his third appearance of the week, each prompted by a vital vote.”

Of course, there is nothing poignant about this, and personally I find it disgusting. The scene underscored the decay which has long taken root in the U.S. Senate. Byrd, who spent decades in the upper chamber, was less a public servant than a feudal lord.

Today, his name dots public works in the Mountain State, a testament to the billions of federal pork he steered there. His iron grip on power choked off a generation of public servants. Being a Senator is demanding work, requiring great feats of stamina to navigate complicated legislation. Does anybody think a 92-year-old man is really the person most up for the job? Yes, we’ve all seen stories of incredible individual achievement, but by and large we all know the answer to that question is no. My age rage is also about a distinct lack of diversity in the Senate, an inability to understand issues younger people like me care about, but most important, a practical fear of their cognitive and physical abilities.

On aggregate, across all racial, ethnic and gender lines, people start to decline after they reach a certain point. We all know this. This fact is not disputed or remotely controversial. Many believe that Ronald Reagan was already suffering from early Alzheimer’s disease during his second term as president. It struck Donald Trump’s father, and it’s simply not unfair to wonder about the condition — especially during the president’s more disjointed monologues.

There’s not much we can do about Trump, but Congress can fix their age problem with a simple solution. Term limits. Once a staple of GOP ideology and Newt Gingrich’s “Contract With America,” the promise to rein in decades long congressional careers fell by the wayside like so many other promises of that era. Of course, it’s not in vogue much these days, because let’s face it — being a feudal lord clearly has its perks.

But if Republicans fall short due to McCain’s untimely surgery, the issue may be one they want to revisit. It’s in their best interests — and incredibly also — the country’s as well.