With a Week to Go, the Election Is Where Nearly Everyone Wants It to Be
Opinion

With a Week to Go, the Election Is Where Nearly Everyone Wants It to Be 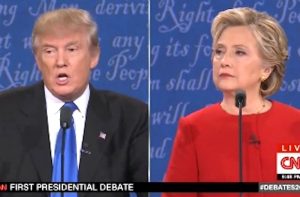 As Shakespeare once famously/supposedly wrote: “All the world is a stage, and all the men and women merely players.” With that in mind, it appears that the final week of this interminable election is set up perfectly for nearly all the most prominent actors to play out their roles and get pretty much, if not exactly, what they want from the plot.

In the aftermath of the James Comey letter and the mysterious national poll-tightening which proceeded it (I had been told that the polls were “rigged” against Donald Trump, so this is quite confusing), we now have the type of drama and suspense on which a good storyline relies. Even if Hillary Clinton still were to end up winning fairly comfortably, that’s irrelevant because this is all a game of perception. Reality means very little, if anything and the “conventional wisdom” is that the game is now basically tied going into the last minute (even if the team with the ball is in easy field goal range).

This is, of course, exactly what the news media wants most. Philosophically, most of the media would strongly prefer a Clinton victory (though they also wouldn’t mind the ratings/storyline of a surely crazy Trump presidency), but they never wanted that outcome if it meant a boring and ratings-diminished last week of the campaign and election night. Now they are assured that everyone will be holding their breath and watching them at least into early November 9th.

If the outcome ends up being the worst possible for the country, that doesn’t matter to the news media. That calculation isn’t even on their radar screen. In fact, what’s bad for the nation is often very good for the news media. That pathetic reality is a big part of how we ended up in this mess of having two horrendously awful celebrities as our primary presidential candidates.

As for Donald Trump, he and his campaign couldn’t be happier with the current climate. It appears as if they will not get blown out, which prevents total humiliation for their egomaniac leader and keeps “Trump TV” a far more viable option than it might be. Bizarrely and quite contradictorily, it also keeps the bogus “rigged election” narrative alive as a post-loss excuse because now he can claim that some polls showed him winning (not really). The fact that he would be forced to rely on polls which he previously claimed were “rigged” himself in order to make the argument is irrelevant. In “Trump World” there is no need for logic, facts, or consistency.

I am one of those who has always felt that a close and controversial loss is the scenario which would be best for Tump personally. This would give him the bitching rights and the “credibility” that his toddler mentality has always craved, without forcing him to actually do the tough work of governance and going down in history as, at best, the worst and most hated president in modern American history.

He is uniquely unfit to serve in one of the toughest positions in the world and I would like to believe that, even as delusional as he can be, Trump realizes this at some very base level. This is why I believe that the Republican Party establishment itself would also be very content with a close Trump loss, especially if it also somehow allowed the GOP to hold on to control of Congress.

As for Clinton, obviously, especially since she must still have nightmares about being “robbed” by Barack Obama and the news media in 2008, she would prefer to have an easy victory without any fears of controversy or a massive upset. But, in the end, all she really wants is to, in the words of the late NFL legend Al Davis, “Just win, baby.”

I still believe, as I have predicted for over a year, that this is what will end up happening. It could be a 272-266 Electoral College nail-biter, or it might very well be a more clear-cut 294-244 victory. I still believe that an Obama-like 334-204 win is very much in play. However, what I still do NOT see is how Trump gets to the magic number of 270.

For Trump to get to 270 you have to presume at least three things. Each of which is possible, but seem extremely unlikely to all happen at once.

First, the polling, especially the state surveys, must be “off” by at least 2-3 points. There is certainly a chance of this, but in 2012 when Republicans famously (though they seemingly have somehow forgotten this) presumed that there was a polling bias in favor of the Democrat, reality turned out to be in the opposite direction. With a gun to my head, I would predict a similar situation occurs this time around.

Second, a significant portion of undecided voters must break for Trump. Given the Comey “news,” this would seem logical, but because of Trump’s unprecedented personal negatives, this would appear to be a stretch. It seems more likely to me that such voters simply stay home decide to make a protest vote. That is still significant in a very close race, but it diminishes the impact of voters being turned off by the stench of Clinton’s emails.

Thirdly, you must believe that having huge advantages in money and get-out-the-vote operations is basically meaningless. There is no question that Clinton has far more fuel in her tank than Trump (thanks in part to him having lied about self-funding his campaign with at least $100 million) and that usually makes a real difference, especially in a national election with lots of states in play. However, I have always factored in that Hillary might be the equivalent of bad cat food which, no matter how much you dress it up, there is no way to make the feline consume it if they just don’t want to do so.

I expect the next seven days (or more) to be a fittingly insane and unpredictable ending to a ridiculous and yet, in the end, remarkably predictable campaign. When it is finally over, everyone involved will benefit, except, of course, the country itself.