Wolf Blitzer Wants To Know: ‘Why Are Some People Running For President?’ 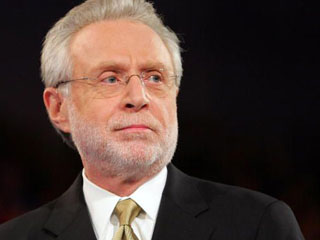 It’s a question many Americans often ask themselves, particularly at a time when the nation is facing dire economic problems, a world in turmoil, and a Congress that often seems to prefer bickering over actually writing laws: why would anyone want to be the leader of the free world, especially in 2011? CNN anchor Wolf Blitzer asks exactly this in his latest CNN blog post, and doesn’t find any particularly good answers.

Blitzer may not have intended to send the nation into a tizzy of existential crisis, as his post goes on to list a number of people for which he can find no good reasons to launch a presidential bid, rather than questioning the motives of anyone running for president. “I never stop marveling at the occasional weirdness going back decades,” he notes, after listing a number of people who, in his estimation, have better things to do with their lives. He begins with Rick Santorum and Herman Cain, who he seems to question because of their failed political attempts in the past. Then there are Sarah Palin and Jon Huntsman, who quit their political positions in a possible attempt to get a presidential committee together. “I believe if the people elect you to a position, you have a responsibility to finish the job,” he snarks at them.

He doesn’t quite blame the Republicans for the current field they have, noting that many in the party are calling for people with gubernatorial experience who haven’t quit their jobs to through their hat in the ring. But he does note that the fact that the two Congressional Republican leaders– Speaker of the House John Boehner and Senate Minority Leader Mitch McConnell— are getting absolutely no encouragement to run presents a strange position for the Republicans to be in.

But his central question, while meant in a specific way towards those who don’t seem to have the record to run, comes across as a more general question of why anyone would want to run for President in the first place– and that question strikes deeper at the heart of American political distrust than the bizarre scenario the Republicans are now in. What kind of person would want this job, and wouldn’t that person be precisely the type we don’t want in office? Many Republicans point to Barack Obama as the primary exhibit of this phenomenon (it certainly isn’t a partisan question), but with 2012 just around the corner, it’s a question worth a bit of revisiting. Even if Blitzer may not have intended to ask it.