Woman Who Wants To Be 1000 lbs Becomes Cable News Fodder 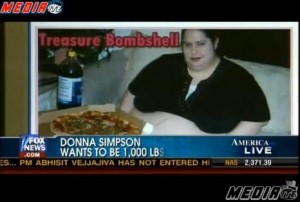 Move over, Balloon Boy. Pull over, Prius Dude. There’s a new spectacle to feed the voracious cable news beast, and this one really lets the media in on the act. Donna Simpson, a 600-pound Old Bridge, NJ woman, is all over the news today because she’s on a diet… (cue blandly surprised news-anchor-voice) to gain 400 pounds!

That’s right, Simpson’s goal is to hit the half-ton mark, and she funds her $750-a-week meal plan via a website where people pay to watch her eat. Have we graduated from morbid curiosity to accessories to murder?

The way this story is sweeping cable news shows the pack mentality of today’s newsmedia, and reveals their true bias, as Jon Ward pointed out: laziness. Here’s a story with a light reporting load, but lots of eyeball-grabbing images and talking head fodder. Already, Fox News’ report connects Simpson’s quest with that old favorite, the Welfare Queen, stating of the costly medical conditions she will develop, “Someday, the experts say, we all may support her.”

Others just seem to revel in the freakshow craziness of it all, but AOL’s Katie Drummond hits the nail on the head when she notes that all of Simpson’s heavyweight role models that have been famously and morbidly obese before here share one thing in common: they’re all dead.

Now, it is tempting (for some) to say “She’s doing it to herself,” an oddly one-sided reaction that insulates her only from compassion, not scorn. Sure, she bears a measure of personal responsibility, but so does the boyfriend who she says sought her out on a fat-fetish website, so do the people who pay to watch her eat, and so do the media who are feeding into her outlandish, self-destructive goal.

Is she free to eat herself into an early grave? Certainly. Would she be doing it without an audience? I can’t be sure, but I doubt it. The whole thing reminds me of the film Untraceable, in which a killer rigs murderous devices, like an acid bath, to inflict lethal consequences once a certain number of internet hits to the live video stream are achieved. The fact that we can’t seem to look away from things like this might actually end up killing someone this time.

Maybe there will be some silver lining to this. Maybe the assholes at the weight-loss company who offered unsolicited advice to Gabourey Sidibe will offer up some help for Simpson.

Here’s Fox News’ report on Simpson, in which they speculate on the burden she might put on society one day if she develops health problems she doesn’t have yet. They went through the trouble of contacting Blue Cross and Blue Shield to ballpark her medical costs, but didn’t see fit to just ask Simpson what kind of insurance she has.