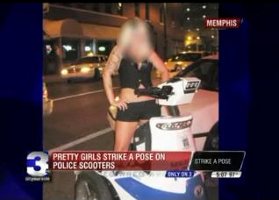 You know you’re dealing with a juicy story when the person reporting the story says, “Okay, it’s not police corruption, it’s not a crime, it’s not national news,” and that’s exactly what we got with a local TV news report on police scooters in Memphis. These weren’t just any police scooters, however…these were unattended police scooters that (gasp!) women then posed on! And they took pictures!

Ridiculous as the story might be, it’s not good publicity for the Memphis Police Department, which the department’s director, Larry Godwin, acknowledged…even he didn’t sound too concerned as he addressed media members. One reason Godwin wasn’t terribly worried: it didn’t appear that officers actually took the pictures of the women:

“It almost looks like one girl took the other one’s picture, you know, and they swapped up, and at least that’s what I’d like to think, and the officers weren’t aware of it.”

Maybe the most comical aspect of the whole story – the women posed on scooters. They couldn’t have found a less badass police vehicle if they tried. Even the reporter (who, we remind you, made fun of this story in the middle of reporting it) called the scooters “Segway[s] on steroids.” For a reminder of how seriously Segways are taken, see here.

Godwin did lament how quickly the image of his department could be tarnished if too many people caught wind of the photos:

“They put ’em on Facebook, they put ’em out there, they put these pictures out there, and the next thing you know, they’re all over the country and they’re saying, ‘What’s going on in Memphis?'”

Of course, what was going on in Memphis was something that could happen anywhere. We’re pretty sure the reputation of Godwin’s department isn’t in danger…if the story makes people respect anything less, it will probably be the current news cycle for producing “stories” like this one. One thing we couldn’t help but wonder about the women on the scooters, though…since after all, it took place in Tennessee: how would Basil Marceaux handle it? Video of the somewhat self-loathing news report is below.