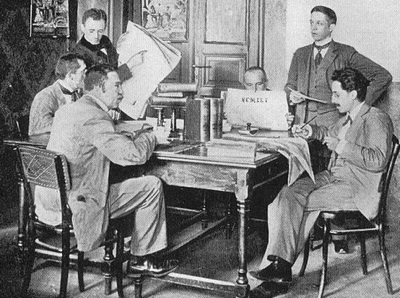 Trading cheap shots for Jello shots. OK, not quite. But close.

A. The hed and the first line sound straight out of Conan’s Twitter Tracker.

B. Jello shots? Chugging? I was under the mistaken impression that four men were going to drink one bottle of beer apiece in an extremely public setting.

2. From The New York Times, “The Trapeze, the Catwalk, and the Gym“:

A tiny redhead with electric-blue shoes strikes up the carnival music. Sixteen people prance forward and backward in vague unison, grip their trapeze bars, tuck their knees in, yelp and swing. Welcome to … the gym.

Newspapers across the nation were stained brown when thousands of coffee-sipping Americans braved the suspense of the ellipsis, reached the last word of the sentence, and did a spit-take. The gym, you say? The tiny redhead is at the gym, and not the circus, or the jungle, or the Trapeze Cult? The New York Times Style Section: it goes there.

He has spent the better part of his life sheltered, often wearing a mask to hide his face from the public’s prying eyes. But after his father’s unexpected death it has emerged that Michael Jackson’s son, Prince Michael Jackson I had become the defacto family leader, according to at least one former Jackson family employee.

This is offensive for so many reasons, and not just because of the questionable “defacto,” which sounds like either a pizzeria or a wireless distribution company. On the word of “at least one former Jackson family employee” (read: two chefs and a paparazzo) ABC drags a twelve-year-old whose dad just died into public scrutiny? ABC, you are the public’s prying eye. Leave the child-exploiting to Perez.