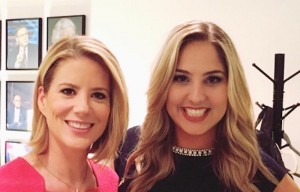 The harassment of female journalists online is well-documented, but this story is something very unique.

Today, a young woman named Kristen Powers wrote an essay for popular women’s interest site Bustle about how frequently she is confused for Kirsten Powers, who you may know as a recent Fox News defector and brand new CNN analyst.

That Powers the CNN Analyst would face harassment online is hardly shocking. It’s par for the course, even if that is pretty sad. That those who seek to insult and intimidate her don’t understand Twitter well enough to realize that a person with an unverified account, two underscores in their username, and 400 followers isn’t a famous television personality is sort of shocking, but they truly do not seem to grasp that the person they’re demeaning is an aspiring journalist, not an established one.

The younger Powers is a reporter, but not on the same level that CNN’s Powers is. In her essay, she explained that the harassment she’s received on behalf of the older woman has shown her what the career path looks like for women.

Receiving these misplaced messages has been a running joke amongst my friends and family throughout undergrad and graduate school. I’ve tried to laugh off the nonsense people send, but at the end of the day it’s not a joke. For many women it’s a dark reality that comes with their job — a job I am about to enter into.

She revealed that the vast majority of the messages she receives are gendered and from men. They aim at the older Powers’ physical attributes and try to diminish her, calling her things like “little female.” The younger Power wondered why no one ever actually tries to create real arguments or debate the merits of what the older Powers has said on national television.

Young Powers wondered that so much, actually, that she called up CNN’s Powers when she was in D.C. recently. They met up for dinner and the seasoned analyst shared her advice: she simply doesn’t read the messages she gets at all.

So fun to meet @KristenPowers__, a young journalist who is a great sport abt getting hate tweets meant for me. pic.twitter.com/iZpFzLQSeJ

That is sound advice. There can be merit to reading critique, but there is very little value in reading gendered slurs and negative assessment’s of one’s physical appearance day in and day out.

To see what the two Powers women deal with on a daily basis, go read some of the tweets embedded in the original post. Be warned: They’re not pretty.