Your Moment Of Glenn: If Ben Franklin Didn’t Want Gov. Health Care How Dare We

Your Moment Of Glenn: If Ben Franklin Didn’t Want Gov. Health Care How Dare We 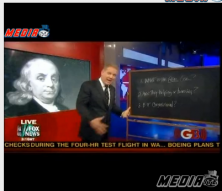 Two moments of Glenn today, both from yesterday’s show. One that makes reasonable sense. One that really just doesn’t. The latter first. In his ongoing campaign against health care reform Glenn Beck pulled a new rationale out of his hat last night: Ben Franklin did not demand health care during the writing of the Constitution — even though he was in great pain due to kidney stones, even though he had already founded a public hospital in Philadelphia. So if Benjamin Franklin did not write public health care in to the Constitution 230 years ago HOW DARE WE?

At the risk of sounding logical, perhaps this would be a good time to point out that among the other things the Constitution also did not manage to include at the get-go was the banning of slavery and voting rights for women. Because every time Beck goes on one of his ‘refounding America’ tears these are two major points he never gets around to addressing. So perhaps the conclusion we are eventually being encouraged to draw here is that we need a Constitutional health care amendment. (Video below.)

The second clip is a tad more sensible. Beck suggests that similar to the NFL, which has increased the safety of their helmets thus making players more willing to take risks and “lead with their heads”, which has subsequently lead to more injuries. Meanwhile, Australian rugby players who have no protective gear suffer less injuries, ostensibly because they are more careful. Getting the metaphor? Beck thinks the no helmet system is actually the “more compassionate” one: “The more protection large entities provide, the riskier you behavior becomes.” In terms of our economy, Beck says the country has been made to feel safe from economic disaster by too big to fail institutions (helmets) like Fanny and Freddy: “the closer the decision and the consequences are to you, the closer you’ll be to a system that actually works.” (Video below.)