‘You’re Out of Your Mind Crazy!’ Glenn Beck, Coulter Square Off Over Mitch McConnell, GOP’s Future 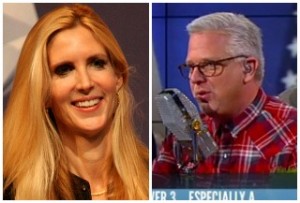 Glenn Beck, who already didn’t like Mitch McConnell, found it beyond laughable how the Senate Minority Leader was able to place a two-billion-dollar earmark for a Kentucky dam in the bill to reopen the government. Beck brought Ann Coulter on his show for the second time this week and asked her point-blank, “You still in love with Mitch McConnell?”

Coulter dismissed this “conspiracy theory,” and Beck, along with his co-hosts, groaned as Coulter attempted to defend McConnell by saying that 1) he didn’t write the bill, and 2) “if this dam bursts, you have basically another Katrina.” As Beck continued to laugh at how clean McConnell’s hands supposedly are here, Coulter teased, “You are such brats!”

They ended up switching topics when Coulter said, “I think we should reflect on whether it was a good idea or a bad idea for you conspiracy theorists to be pushing Christine O’Donnell in Delaware, Richard Mourdock in Indiana.” She argued that Ted Cruz and Mike Lee would have had more allies if conservatives hadn’t tried to primary so many Republicans in 2010 and 2012.

Beck brought the conversation back to McConnell, and fired back at Coulter’s “conspiracy theorist” charge.

“If I’m a conspiracy theorist, then you’re someone who believes in unicorns and leprechauns, because you just think that somebody could be in that office… with that much power, that long, and just be a straight shooter when, I’m sorry, Ann, you’re out of your mind crazy if you think that Mitch McConnell had nothing to do… with a two billion dollar work project in his state.”

Coulter kept insisting it’s not a “boondoggle,” and concluded that the Senate needs more Republicans “so poor Mitch McConnell has the power to do what we want to do.” Beck responded, “Dear God, you had me up until that point.”