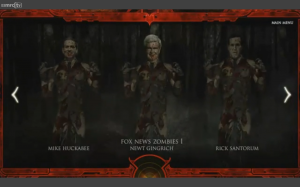 Feeling like your world is being taken over by Tea Party Zombies? Why not use your lunch break to take a few of them out. The folks at StarvingEye have put together a very-much partisan game they call Tea Party Zombies Must Die, a game wherein — as you might guess — you are invited to kill a series of prominent Tea Party figures turned zombie.

The game’s pretty straightforward: the objective is to kill everyone around you, everyone around you being Fox News anchor and Michele Bachmann zombies. Just “DON’T GET TEA-BAGGED,” as per the game’s instructions. And so, armed with a crow bar, you are set out into a world otherwise abandoned to mow down Sarah Palin, Mike Huckabee, Sean Hannity and Koch brother zombies. It took me a while to beat my first Bachmann-zombie, but maybe you are better at video games than I am.

As New York Magazine’s Daily Intel points out, outrage was aplenty yesterday on right-leaning blogs. Breitbart’s BigHollywood had a more gentle “told-you-so” take, making reference to Bill Ayers and Jimmy Hoffa while saying, “We all know who fantasizes and encourages violence.” Powerline wondered if, with games like this, if it is possible “to tell where the respectable left ends and the cesspool left begins; or, more accurately, whether a respectable left exists at all.” PajamasMedia likened the game to Nazi propaganda.

The game seems to have hit on a nerve left raw from the weekend spent discussing Jimmy Hoffa’s call to union members to “take these sonsofbitches out.” Hoffa urged war against the Tea Party, and even though he was imagining an army of unionists waving ballots in the faces of Tea Partiers, the way he said it made it sound like he’d be just as happy to see them yielding crow bars like players in this game. Whereas it was once assumed that violent rhetoric was a conservative proclivity, used mostly by proud gun-totting, NRA approved Republicans, it’s starting to seem like its just an en vogue form of politic talk. If it’s a problem, it’s a nonpartisan one.

Tea Party Zombies Must Die makes game of this, combining violent image and political agenda in a way that has turned scary in the past. However, that this is a game while Sarah Palin’s video-game riffing chart was a political prerogative remains an important distinct; as Daily Intel’s Joe Coscarelli points out, as violent and distasteful as it might be, “at least the game was not signed off on by a professional politician.”

And, anyways if tea-party hunting is not to your thing, you might try SlapObama? The internet is big, and on it there is an offensive game to every taste. Tea Party Zombies is only as worrisome as the rest of it.