Based on Their Absurd Impeachment Defenses, Republicans Must REALLY Hate Mike Pence
Opinion

Based on Their Absurd Impeachment Defenses, Republicans Must REALLY Hate Mike Pence 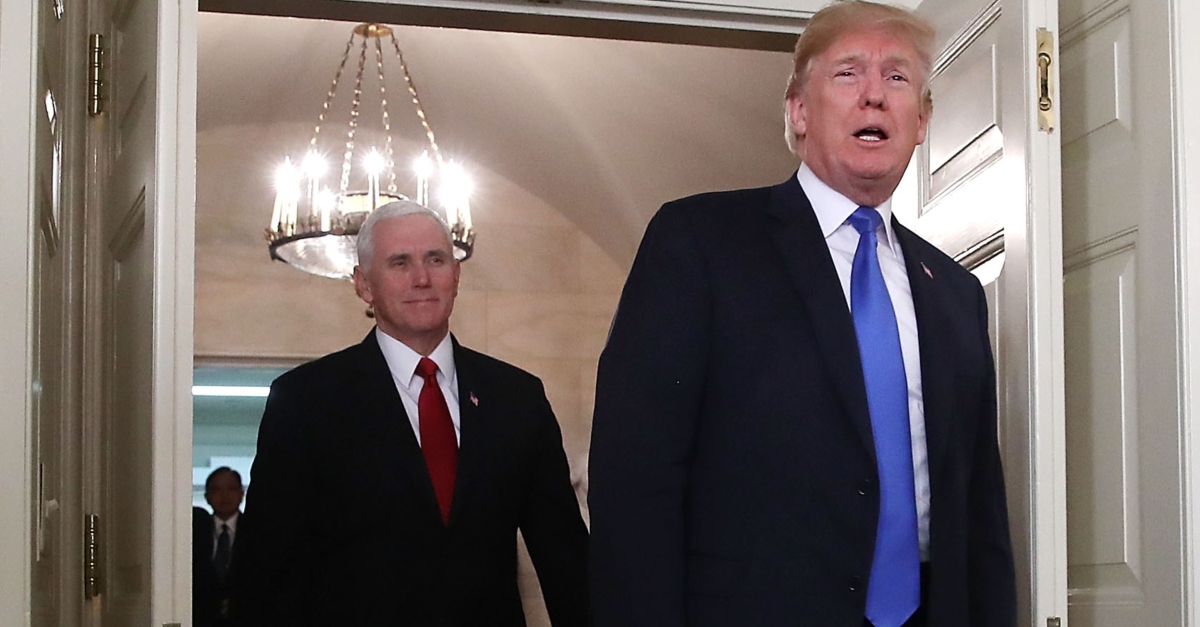 Based on the first series of public hearings in the impeachment inquiry of President Donald Trump, we can discern a lot of important realities. One that hasn’t gotten nearly enough attention is that clearly, at least if their often schizophrenic and nonsensical defenses of Trump are to be taken seriously, House Republicans must REALLY, REALLY hate Vice-President Mike Pence.

After all, one of the most bogus arguments that leaders in my former political party, including our own (very corrupt) attorney general, have used to deflate the movement to impeach Trump is that to remove him from office would to be “overturn the 2016 election,” or “undermine the will of the people.” This is not only a totally bullcrap assertion, but it only makes even the slightest bit of sense if they believe Pence is completely unfit to be president, somehow even more so than Trump.

To understand why this is the case, you first need to both comprehend and remember something which should be entirely obvious to any American who has ever taken a sixth-grade social studies class. That is the fact that, should Trump be removed from office (a scenario that is highly unlikely to begin with) thanks to 67 senators voting to convict him in an impeachment trial, Trump’s own vice-president, Mike Pence, would immediately take over as the commander-in-chief.

That’s right. Trump’s own hand-picked potential successor, who was on the ballot with Trump, and who is a member of president’s own political party (for a heck of a lot longer than Trump has been) would be the new chief executive of the United States.

Not Nancy Pelosi, not Chuck Schumer, and not the winner of some special election. Also, not one other person elected in 2016 would be impacted at all, and, as long as Pence, who has been Trump’s mega-loyal puppy dog in every conceivable way, agreed, not one other person in the entire executive branch of government, nor any of the judges Trump has appointed, would lose their jobs.

Therefore, the 2016 election would not only NOT be “overturned” or “undermined,” it would actually be 100% instituted and validated, exactly as the Constitution requires. If Trump were to be removed, absolutely nothing would change with regard to the balance of political power.

In fact, you could even make the argument that Republicans would strengthen their position in the upcoming 2020 elections by unburdening themselves of an unpopular party leader who led them to massive losses in the 2018 midterms. While Pence lacks any of the cult-stimulating pizazz that Trump has, he also, at least theoretically, doesn’t offend as many independent voters as Trump appears to totally turn off.

So, why are Republicans in Congress SO hell-bent on twisting themselves into illogical contortions to make absolutely sure that Mike Pence doesn’t become president? Well, that’s where things get really interesting, and quite telling.

You see, Republicans aren’t defending Trump based on any sort of legitimate principle, or even to protect their party’s political power given to them by a significant minority of the country’s voters in that now infamous 2016 election. No, they are shielding Trump simply because they effectively view him not as a president, but rather as a king,

To them, Trump is an apparently mentally-mad monarch of whom they are personally afraid. And their king’s “Cult 45” band of rabid Republican primary voters terrifies them even more (bizarrely, even those who are not even running for re-election next year).

Viewing Trump as a king is the only way to rationalize this total disconnect from the idea that his impeachment/removal would not cause any real disruption, and may even preserve, their party’s political power. This is all particularly inexplicable because “conservatives” used to abhor (until 2017) turning the presidency into a monarchy, and instinctively defended the roots of our Democratic Republic, for which we fought a Revolutionary War.

This inconvenient history is probably why when I tell “Cult 45” members on Twitter that Republicans should just allow Pence to become president and move on, that their heads appear to instantly explode. There is just no good answer for them, unless of course they really are a cult, and they really do view Trump as king, just as they demeaned supporters of Barack Obama (including the mainstream news media) for doing over the previous eight years before Trump’s rise to the throne.

There is also a great irony in this succession “blind spot” that Trump and his party have at the basis of their extreme aversion to allowing the impeachment process play out as our Founders would have intended. This has to do with Trump’s life before politics.

Trump used to own the “Miss Universe” beauty pageant. Everyone knows that all such pageants crown a winner with a first-runner-up named so that, should the victor not be able to perform their duties through the duration of their term, that there will be a seamless transition of “power.”

Back in 2002, under Trump’s ownership, that year’s titleholder (of course, she was from Russia) was removed from her position because she literally was not willing or able to do her job. The first-runner-up, who was from Panama, took over her responsibilities without incident, and the “Miss Universe” pageant rolled on, without anyone even complaining that the “will of the judges” had been unfairly overturned.

While it will never happen, and the situations are obviously not perfectly analogous, doesn’t it seem like we should be capable of following our rules at least as well as a second-rate and antiquated beauty pageant run by Donald Trump? Unless, of course, there is something REALLY wrong with Mike Pence.