How Wrong is Tucker Carlson on Vaccine Deaths? A Doctor Explains 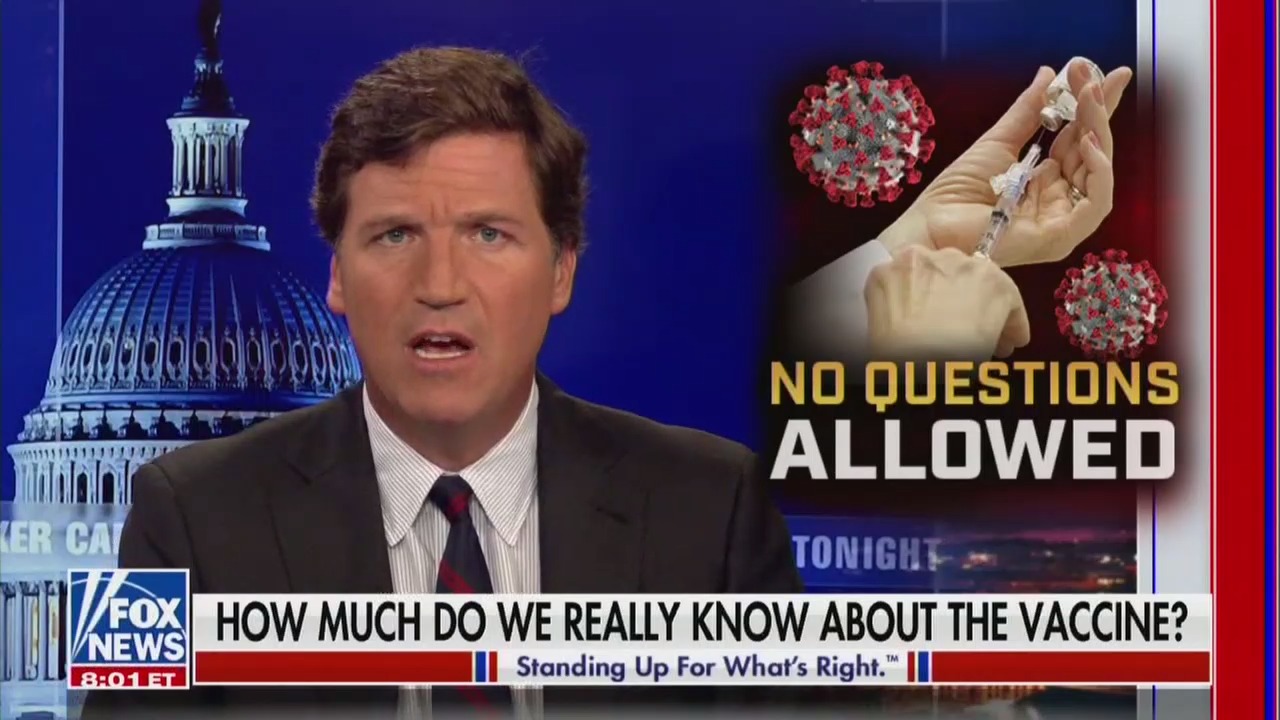 Tucker Carlson’s habit of raising questions about the Covid-19 vaccines continued on Wednesday night with a segment fear-mongering about people who have died after receiving shots.

The Fox News host presented his commentary as legitimate questioning he thinks is verboten by a media that insists everyone blindly accept the effectiveness of vaccines. Of course, questioning the vaccines is not verboten, and plenty of media outlets and experts scrutinize their effectiveness. The problem with Carlson’s coverage — and it’s worth noting he is the most-watched host on cable news — is that he rarely provides answers to the questions he raises. And very often those questions have publicly available answers. As many have pointed out, the Fox host’s clueless innuendo is an irresponsible habit for the host of a news program.

The basis for his latest broadside against the effectiveness of vaccines — a miraculous scientific achievement that can put an end to the coronavirus pandemic — is data from a system hosted by the CDC called the Vaccine Adverse Event Reporting System, or VAERS.

“Between late December of 2020 and last month, a total of 3,362 people apparently died after getting the Covid vaccine in the United States — 3,362,” Carlson said on Wednesday night. “That’s an average of roughly 30 people every day.”

“It’s clear that what is happening now, for whatever reason, is not even close to normal. It is not even close to what we see in previous years with previous vaccines. Most vaccines are not accused of killing large numbers of people,” he continued. “Again more people, according to VAERS, have died after getting the shot in four months during a single vaccination campaign than from all other vaccines combined over more than a decade and a half. Chart that out. It’s a stunning picture.”

Now, it should be obvious to anyone with half a brain cell that, despite Carlson’s sleight of hand, people dying after receiving a vaccine does not mean they died from it.

Regardless, how VAERS collects its data, and what that data means, is complicated.

For answers, I emailed Dr. Pradheep J. Shanker, a radiologist who writes about health in the National Review and elsewhere. In a lengthy Twitter thread, Shanker concluded that Carlson was an “idiot” who misunderstood the data he was presenting on air. I asked him to explain.

Shanker: VAERS was established in 1990 by the Centers for Disease Control and Prevention (CDC) and the U.S. Food and Drug administration (FDA). It was proposed as a form of national warning system, to alert medical experts to possible safety problems with commonly used vaccines. The system was built as a passive apparatus, meaning that it relies on individuals to send in reports. As such, the system was never intended to determine if a vaccine caused specific health problems. The goal was to collect data, and then look for patterns that could indicate that there could be a safety problem that required further, more in-depth investigation.

Is Tucker Carlson’s conclusion about vaccine deaths, based on his assessment of VAERS, accurate?

It is not accurate. VAERS was intended to cast a wide net to capture any possible or potential complication that even has the remotest possibility of being related to the vaccine. Any adverse event is considered reportable. This ranges from direct symptoms, such as fevers or hematomas, to events such as death from blunt trauma in a car accident (which, of course, is highly unlikely to be related to the vaccine). More severe complications tend to be reported more often. And unlike health professionals, any reports of complications that are known by vaccine manufacturers must be reported, under penalty of law. With hundreds of millions of doses, the likelihood of some percentage of those people dying (especially among the elderly) after vaccination is a certainty. Carlson did nothing to filter out which deaths were expected with or without the vaccine, and which deaths can be tied to the vaccine.

Carlson often frames his segments doubting the vaccine by complaining that the media is not allowed to question the science of vaccines. What do you make of that argument?

That may be the most ridiculous argument of all. VAERS is literally built to discount that argument! Furthermore, there has been plenty of discussion on social media, in the traditional media, and even in Congress about the risks of the vaccine. The House is carrying on hearings this week and next on the subject. No one has been significantly curbed in their ability to question the science.

Do you think Tucker Carlson’s coverage here is dangerous?

Here I want to be careful. I am generally a free speech absolutist, and even at this late date I will defend Tucker’s right to say what he wants. However…I think his rhetoric and ignorance could lead to people getting sick. And that is horrible.

Tucker Carlson often raises questions about the vaccines on his show. For instance: “So maybe it doesn’t work and they’re simply not telling us?” Do questions like that have an answer? In other words, do the vaccines work?

It really depends on what we define as ‘the vaccine is working’. Before this pandemic, we wanted almost certainty of safety, as most vaccines were given to children. Also, because most of those disease (Polio, etc) have reached herd immunity, the risk is low as long as we continue to vaccinate most kids.

With COVID, the equation changed. Hundreds of people have died in the US alone, and millions are going to die overseas. So, what risk are we willing to take to save the vast majority of those people? No risk? A little risk? A lot?

For most medical professionals (myself included) getting a vaccine that is around 95% effective in preventing death and serious complications is a GODSEND. A year ago, I would have given my left hand for such a treatment. Imagine: Out of 600k dead in the last year, what if we could have saved all but 30k or so? That would have been a heroic effort.

So the answer to your question is, if your goal for the vaccine was to provide a medical answer that would save 19 out of 20 people that were at risk of covid, in exchange for complications from the vaccine that literally number in single digits…I think it is a no brainer.