Winners and Losers from a Stunning Super Tuesday 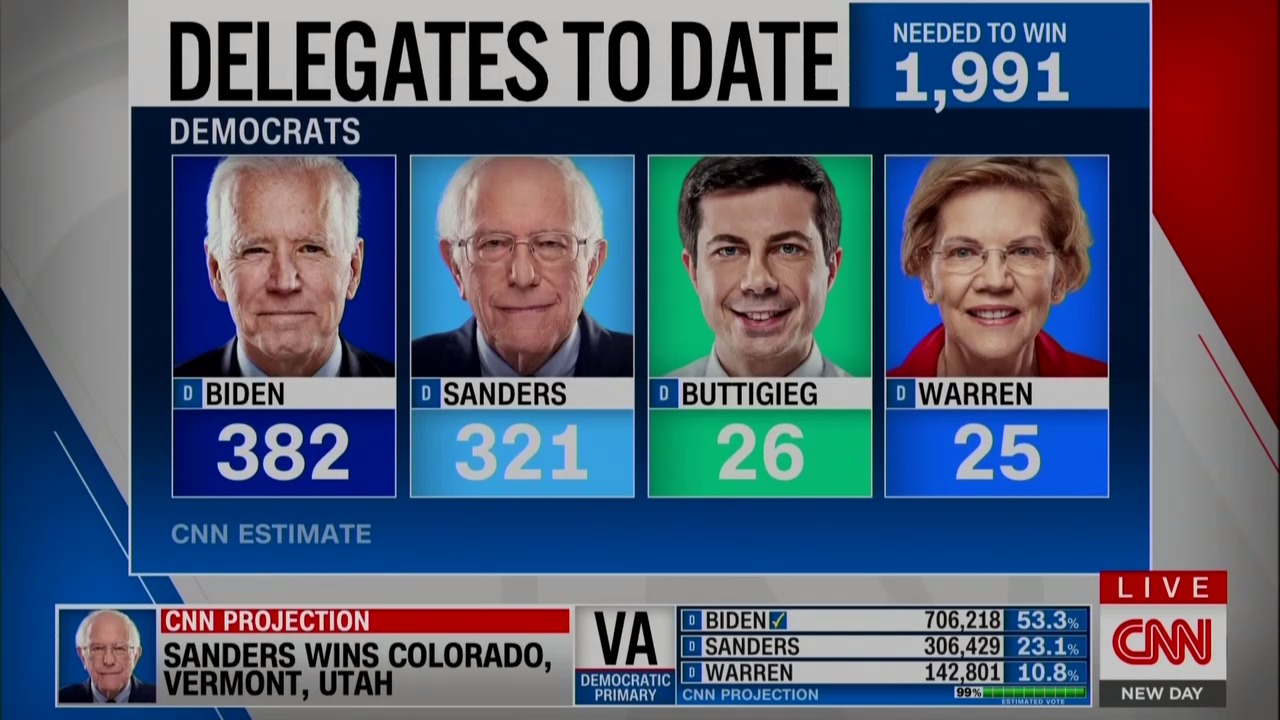 In the last few days, we have witnessed the most remarkable political turnaround in modern political history. The amazing comeback Joe Biden’s campaign that was somehow engineered in less than a week makes John McCain’s incredible rise from the ashes in 2008 seem like he merely kicked a short field goal to overcome a two-point halftime deficit.

I was totally wrong when I described this Democratic contest as an aircraft carrier pointed in the wrong direction [if your goal is to avoid a second term for President Donald Trump] after Iowa and New Hampshire. This race is more like a skilled teenager on a skateboard who suddenly shifted course.

Joe Biden began this primary process like a starting pitcher taking the mound for the 7th game of the World Series who was barely throwing more than 70 miles per hour, making him look inevitable that he would get crushed. I was one of those calling for Amy Klobuchar to come in from the bullpen to replace Biden before the score got out of hand.

Then, thanks largely to Rep. James Clyburn’s key endorsement in South Carolina, he got a surprisingly huge victory there and somehow starting chucking 90 mile-per-hour fastballs. I was skeptical that even that large a victory would translate just 2-3 days later into him taking control of the nominating process, but that is exactly what happened on Super Tuesday.

Here are the biggest winners and losers from last night’s results.

Joe Biden: Winning big upsets in Massachusetts, Minnesota, Maine, and Texas, has put him in the driver’s seat to win the nomination. It is now clear that, barring a Biden catastrophe, Bernie Sanders can’t consistently (if at all) beat Biden in a head-to-head battle and, after Michael Bloomberg gets out, Biden should eventually pull away, possibly convincingly.

Political Endorsements: Thought to be an antiquated tradition with little real meaning, political endorsements played a massive role in Biden’s sudden resurrection. Clyburn sent up a “bat signal” to black voters in South Carolina, whose emphatic backing of Biden caused a domino effect elsewhere. Then, Amy Klobuchar and Pete Buttigieg dropping out — immediately endorsing Biden in Texas was a stroke of political genius.

Black Voters: If Trump is indeed denied a second term, the nation will owe a debt of gratitude to the incredibly loyal black voters who salvaged Biden’s hopes and drove a stake through the heart of the Sanders insurgency.

Establishment Rationality: In an era, led by Trump’s coup of the GOP in 2016, when political “establishments” have been ridiculed as impotent and out-of-touch, this time the voters listened to the so-called experts. It used to be said that, in primaries, Democrats fall in love and Republicans fall in line, but in the last two primary cycles those roles have been 100% reversed.

Amy Klobuchar/Kamala Harris: It sure seems like one of these two female senators is going to be Biden’s vice-presidential candidate. Klobuchar, who delivered Biden an upset in her home state of Minnesota, would be a tremendous fit with him. However, he may feel compelled to go with Harris [who was weirdly silent before the California primary] because she is a person of color.

Never Trump Conservatives: Many of us were terrified of having to make a horrendous choice between Sanders and Trump. While I was not one of them, some high-profile “Never Trump” conservatives even flirted with the idea of supporting a pacifistic socialist over Trump. Now that burden has been lifted.

Hunter Biden Conspiracy Theorists: The elements of state-run pro-Trump media which invested deeply into all sorts of conspiracy theories to defend the president from impeachment will now be able to get at least several more months, and maybe even several more years, of mileage out of them. This topic will likely become the “Hillary’s Emails” of the 2020 general election.

Bernie Sanders: His movement was finally revealed as at least somewhat fraudulent last night. He dramatically underperformed both the polls and his own performance from 2016. Now he will have to decide between a desperate scorched-earth campaign against Biden, which could harm his party’s chances against Trump, and burying his ego by letting this process safely drift the Biden victory ship into port, with him once again coming in a strong second.

Socialist Revolution: When a self-proclaimed socialist promising revolution can’t get over 30% of the vote in a Democratic primary, against a small and weak field, even here in communistic California, then the country simply isn’t ready for that kind of radical change… yet.

Elizabeth Warren: Her many fans in the news media will give her a participation trophy for “taking out” Bloomberg at the debates, but her entire campaign was a disaster. She never came close to winning a state, finished a distant 4th in New Hampshire, which neighbors her home state of Massachusetts, and then a weak 3rd in her home base itself. It is possible she could be Biden’s VP as a compromise to Sanders’ supporters at the convention, but now that gambit is very unlikely to be needed.

Michael Bloomberg: While we should not be feeling sorry for him, there has never been any one in history who has spent more money of a political campaign with less to show for it than Bloomberg. But, assuming he gets out soon, at least he now he won’t get blamed for helping Sanders win the nomination by blocking Biden’s path, and the chances of Trump being stopped from a second term (Bloomberg’s primary goal) just increased.

The News Media: While it is still possible that Biden won’t get a majority of all the delegates, the media’s dream of a truly brokered convention has been essentially shattered. And, if Biden does particularly well the next two Tuesdays, while they will try to pretend their primary party isn’t really ending, they will need some new programing for the spring and early summer. The possibility of a Biden presidency, from a ratings perspective, also doesn’t really appeal to them.

Sellers of Political Media Advertising: When Joe Biden makes this kind of comeback while spending almost no money on media (and after Trump won the 2016 GOP primary almost entirely on free media), while Bloomberg and Tom Steyer got almost nothing after spending unprecedented amounts on commercials, how does anyone sell political TV ad space in the future?

Donald Trump: It now appears as if he is going to get the opponent he feared so much that he was willing to commit impeachable offenses in order to smear him. He may still win reelection, but at least now it is not going to be handed to him.

John Ziegler is a senior columnist for Mediaite. He hosts a weekly podcast focusing on news media issues and is a documentary filmmaker. You can follow him on Twitter at @ZigManFreud  or email him at [email protected]