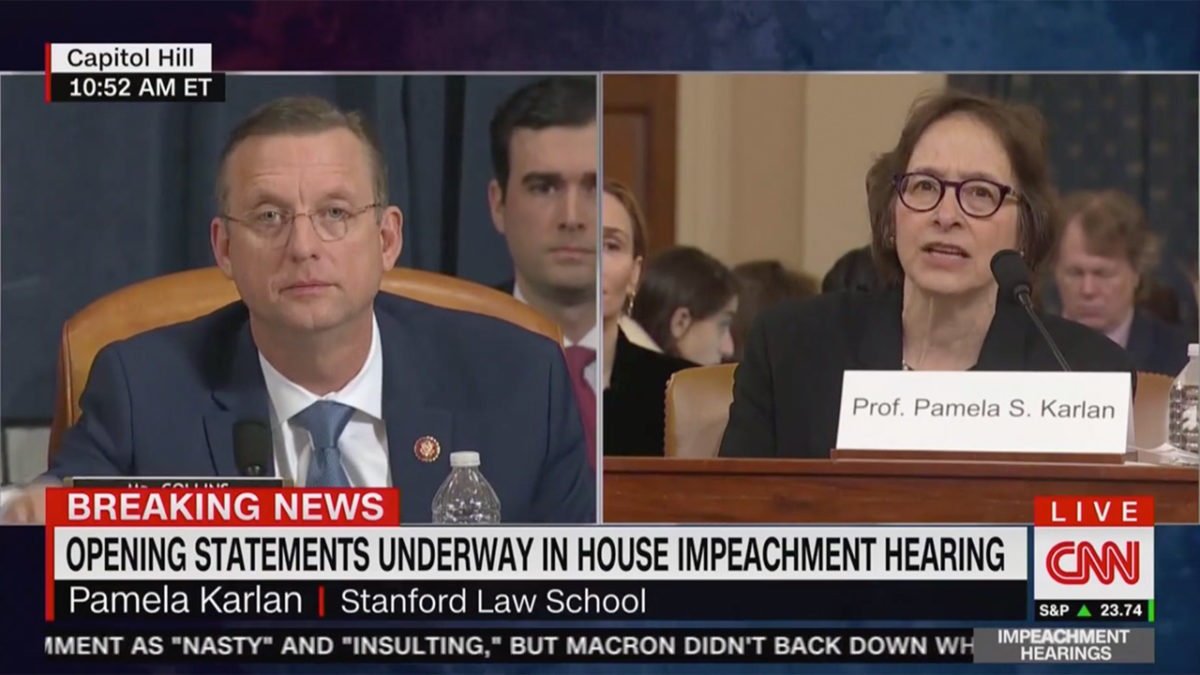 “While the president can name his son Barron, he can’t make him a baron,” Karlan remarked, prompting a wave of backlash from conservatives.

Classless move by a Democratic “witness”. Prof Karlan uses a teenage boy who has nothing to do with this joke of a hearing (and deserves privacy) as a punchline. And what’s worse, it’s met by laughter in the hearing room. What is being done to this country is no laughing matter.

So Hunter Biden is off limits, but 13 year old Barron Trump is not?

This gets more unreal by the minute!

She just went out of her way to mock and attack Barron Trump, the President’s 13-year-old child.

Democrats have disgraced themselves by giving a platform to this unhinged, petty kook. pic.twitter.com/LuteVNdbS7

Kayleigh McEnany, Trump 2020 national press secretary: “Only in the minds of crazed liberals is it funny to drag a 13-year-old child into the impeachment nonsense. Pamela Karlan thought she was being clever…but she instead reinforced…that Democrats have no boundaries." pic.twitter.com/r5Fr0nNrU5

Just when you thought this impeachment hoax couldn’t get anymore ridiculous, the witness invited by Democrats is throwing cheap shots at the 13 year old son of @realDonaldTrump. Gross and shameful! pic.twitter.com/ugVZfVYDR9

Hunter Biden is off limits but Barron Trump isn’t… https://t.co/NykrnEtdV9

As if we needed further proof that this impeachment attempt is entirely unhinged – one of today’s key witnesses took an entirely unnecessary shot at @realDonaldTrump’s son Barron.

One of Democrats’ impeachment witnesses, the one who says she can’t walk on the sidewalk in front of Trump hotel because of her hatred for Bad Orange Man, just went after Barron Trump, if you’re wondering how things are going.

3…2…1… til Democrats tell us bringing the President’s 13yo son into impeachment is totally cool.pic.twitter.com/t72cj3JlZa

Republicans: What evidence is there for impeachment?

Not a good look for Angry Professor Karlan- she is attacking Barron Trump – I thought kids were off limits? #maga #ImpeachmentHearings pic.twitter.com/PHILY3yarv

Witness Pamela Karlan just attacked Barron in the middle of an impeachment hearing.

This is a circus. pic.twitter.com/vJC0bWfkIB

NBC News reporter Jonathan Allen posted, “There was a time when no one would think to invoke the minor child of a president in a derisive manner to make a political point at a congressional hearing.”

There was a time when no one would think to invoke the minor child of a president in a derisive manner to make a political point at a congressional hearing.