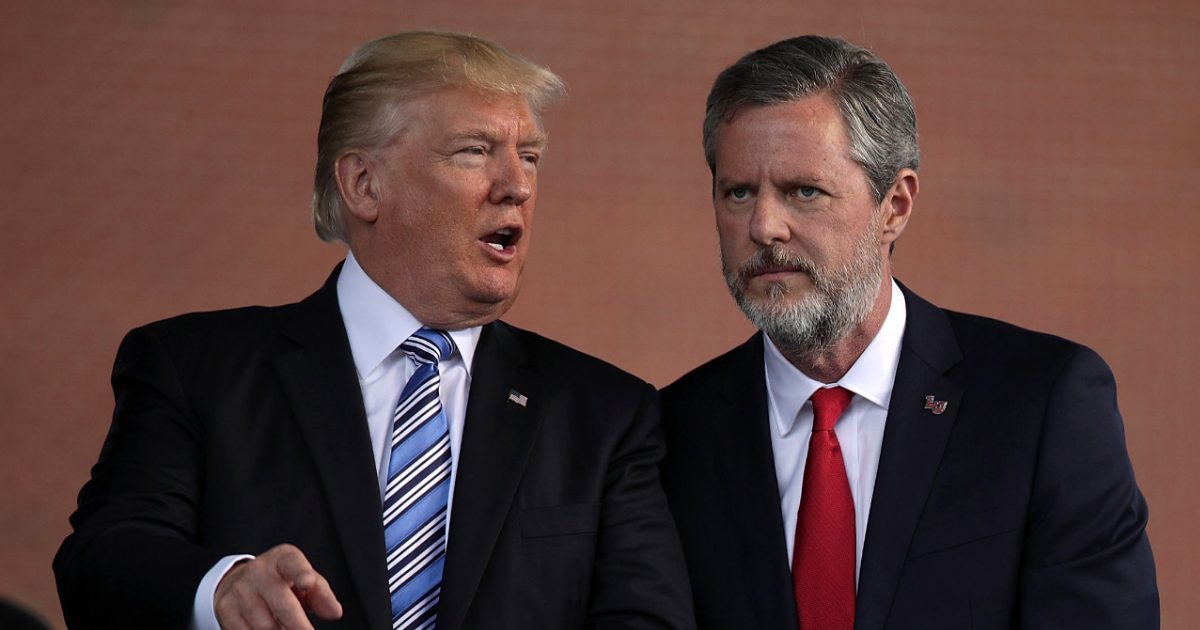 A new report on Liberty University president Jerry Falwell Jr., which details his alleged abuse of school finances and fierce control over its internal workings, sheds light on how the top evangelical leader operates his “dictatorship,” as some of his employees described it.

Politico Magazine published the exposé on Monday, which was authored by freelance journalist and Liberty graduate Brandon Ambrosino, after interviews with over 25 current and former staffers at the university, as well as internal emails and overviews of Liberty’s finances. However, those that spoke to Ambrosino did so anonymously, as Falwell — whose name has been in the news of late due to him loaning out millions of dollars to a pool boy to open a gay-friendly hostel, as well as Michael Cohen’s purported work to take care of leaked nude photos of his wife Becki Falwell — employs fierce nondisclosure agreements to ensure that employees do not speak out about the school or personal and professional dealings.

Among the allegations include claims that Falwell crudely and candidly discussed his “sex life,” showed sexually suggestive photos of his wife to employees, seemingly lied about going clubbing with his son in Miami, and used the school’s funds to invest in businesses, political operations, and real estate that he had a personal or financial stakes in, all while enjoying near-total control of Liberty and acting as its public face since taking over from his father Jerry Falwell Sr., who passed away in 2007.

“We’re not a school, we’re a real estate hedge fund,” one senior employee at America’s largest Christian university told Politico. “We’re not educating, we’re buying real estate every year and taking students’ money to do it.”

One longtime staffer still at the school said they feel as if they are “betraying [the Falwells] in some way” by discussing internal problems with the press, but added, “Someone’s gotta tell the freakin’ truth.”

While speaking on Falwell’s shady investments — which he utilizes the school’s $2.5 billion in assets for; a figure that has shot up significantly in recent years due to Liberty’s booming online degree programs — one top school official said, “We’re talking about the difference between right and wrong. Not even ‘being a Christian,’ but being a good person, versus people who manipulate the system.”

Those close to the Falwells described to Politico a that reigns over the university with an iron fist. One top official outright referred to Liberty as “a dictatorship,” adding, “Nobody craps at the university without Jerry’s approval.” As for Becki Falwell, one staffer at Liberty said that if “you’re walking down the hall and you didn’t greet her right, you’re fired.”

“Everybody is scared for their life. Everybody walks around in fear,” said another current employee.

Given Liberty’s status as a 501(c)(3) tax exempt organization, Falwell has had questionable dealings with Trump and his campaign. During the 2016 election, Michael Cohen — then working as Trump’s personal attorney and fixer — hired Liberty’s top IT employee and close Falwell confident John Gauger to rig online polls for Donald Trump. On top of being a Liberty staffer, Gauger operates a private tech firm, RedFinch LLC, which was paid $123,950 by the university in 2016; in the two years prior, RedFinch was paid over $12,000 to run a voting script ensuring online polls were rigged in Trump’s favor in the lead up to 2016.

Per a Wall Street Journal report, one of the rigged poll was conducted by CNBC in a survey on America’s top business moguls. Liberty University’s official Twitter account tweeted out the poll and directly asked followers to vote for Trump.

“This paints a picture of how Jerry operates,” one former Liberty official told Politico. “Gauger gets promoted, [Liberty] contracts for RedFinch … and [Gauger] gets hooked up with people like Cohen to make more money via RedFinch.”

Trey Falwell, son of Jerry Falwell Jr. and a current vice president at the university, launched a business in 2012 which his father described in an email as “a new company to do the management” of Liberty’s real estate investments. Trey’s firm, JF Management LLC, controls properties like a Lynchburg, Virginia shopping center that was purchased using university funds, despite the Falwell family personally investing money into the location.

Another instance of Falwell’s questionable handling of school funds include a $200,000 university loan granted to Prototype Tourism LLC, a marketing company founded by a Liberty alumnus who is close with the Falwells. Prototype Tourism struggled to pay back the loan, but Falwell defended the move by noting that Liberty was “a minority investor in” the company. “In hindsight, it was not a good decision,” Falwell admitted. “LU lost its investment and the loan portion of the deal was only partially paid back.”

Construction Management Associates Inc., a company founded in 2013 by close Falwell ally Robert Moon, is paid to carry out much of the construction work that takes place on and around Liberty’s campus. Falwell granted Moon a $750,000 university loan to launch CMA six years ago and his since granted his friend’s company $138 million in construction contracts and land owned by Liberty.

Falwell denied any wrongdoing in the investment and subsequent contracts: “I have not personally benefited financially from CMA’s or any other contractor’s work for Liberty University nor has any member of my family.”

The Politico story also uncovered Falwell’s seeming lie about visiting the Wall Lounge nightclub in Miami during a supposed business trip with his son Trey and his wife.

“There was no picture snapped of me at WALL nightclub or any other nightclub,” Falwell told Politico, who asked the evangelical leader about a candid photo clearly showing Falwell in the middle of a Florida dance club (Liberty’s infamously strict Christian conduct code bars students from organized co-ed dancing, consuming alcohol and drugs, and engaging in other normal behavior deemed not in line with Biblical teachings).

“I never asked anyone to get rid of any pictures on the internet of me and I never have seen the picture you claim is of me below. If the person in the picture is me, it was likely photo-shopped,” Falwell stated in a follow up email after being asked if Liberty’s IT staffer worked to hide the clubbing photo from online search results. “But the bigger question … is why would I want a picture like that taken down if I had seen it?”

Liberty employees also discussed Falwell being “very, very vocal” about his “sex life,” as one witness to the crass comments said. “All he wanted to talk about was how he would nail his wife, how she couldn’t handle [his penis size], and stuff of that sort,” another ex-Liberty staffer noted, while a third longtime university official claimed that Falwell had texted around — possibly accidentally — photos of his wife in a sensual maid outfit, an accusation that the Liberty president denies.

“I never had any picture of Becki Falwell dressed in a French maid uniform, and never sent such a non-existent photo,” he told Politico.