Proud Boys Merchandise With Trump’s ‘Stand Back, Stand By’ Quote Being Sold on Amazon Following Debate 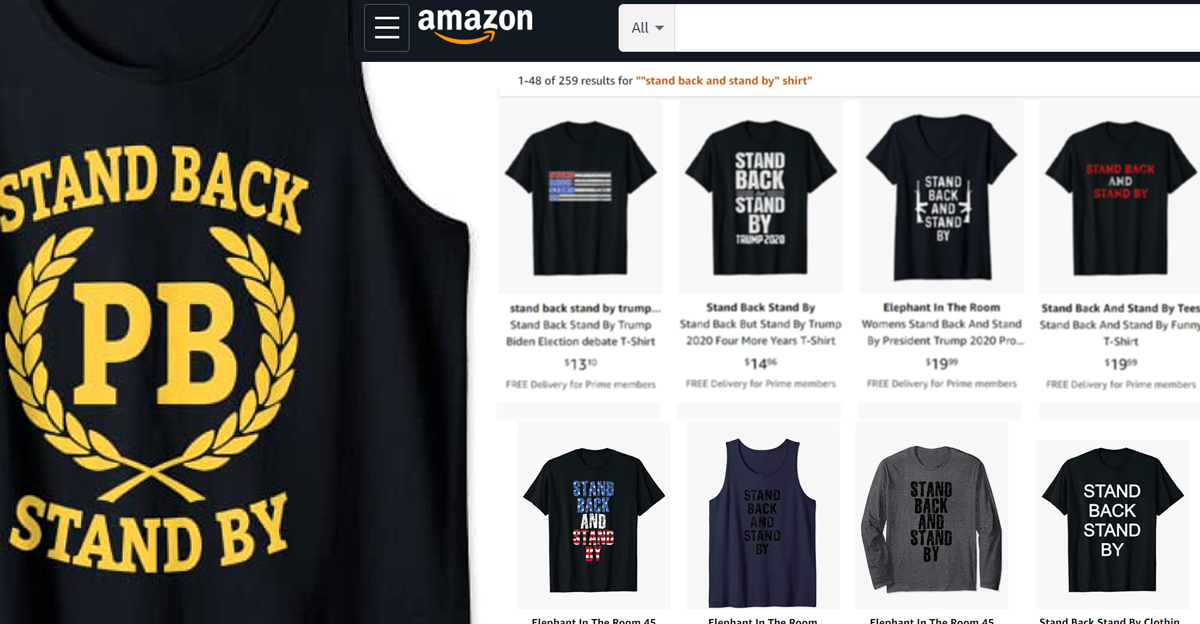 T-shirts featuring the logo of the far-right ‘Proud Boys’ along with President Donald Trump’s “stand back” and “standby” quote from Tuesday’s presidential debate are on sale at Amazon, Wednesday, just hours after Trump’s remarks became a top story.

Trump was asked by moderator and Fox News anchor Chris Wallace whether he would be willing to “condemn white supremacists and right-wing militia groups” and to tell them to “stand down” from violence. When Trump said he would, both Wallace and opponent Joe Biden said to go ahead and do so. Biden mentioned the violent and far-right group “Proud Boys” as a specific white supremacy group to condemn, and Trump then curiously replied, “Proud Boys, stand back and stand by!” rather condemning the group.

The moment generated a deluge of news and waves of traditional and social media outrage.

Trump’s comments were seized upon by the Proud Boys themselves, who celebrated the debate mention and Trump not only skipping the chance to condemn them but seemingly signaling them.

The extremist group’s search profile went through the roof, too. And next thing you know, the message and the club were on Amazon.

CNN national correspondent Sara Sidner noticed and reported on the sale of merchandise at Amazon with Trump’s quote, saying that the Proud Boys are “selling t-shirts on Amazon right now.”

Mediaite confirmed that Amazon is currently hosting a wide selection of t-shirts with Trump’s quote on them being sold by third-party sellers, including merchandise featuring the Proud Boys logo. Despite the framing in Sidner’s comment, whether the merch is really being sold by actual members of the group or not is anyone’s guess. But she was correct about the existence of apparel. This is just a sample, by screenshot. There were many more. 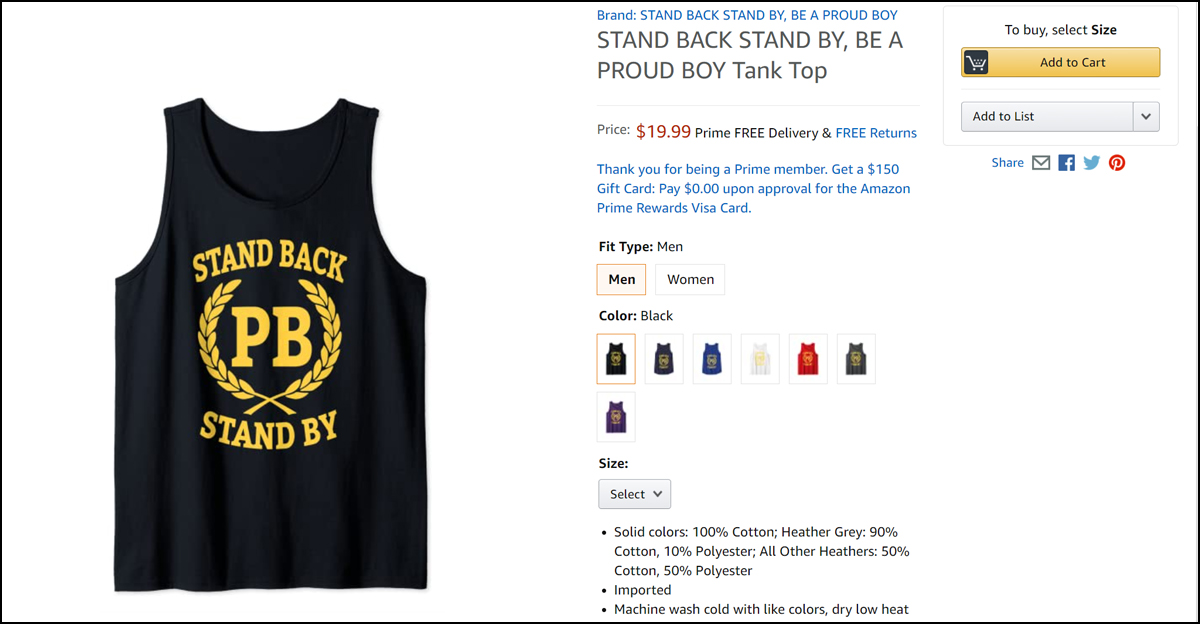 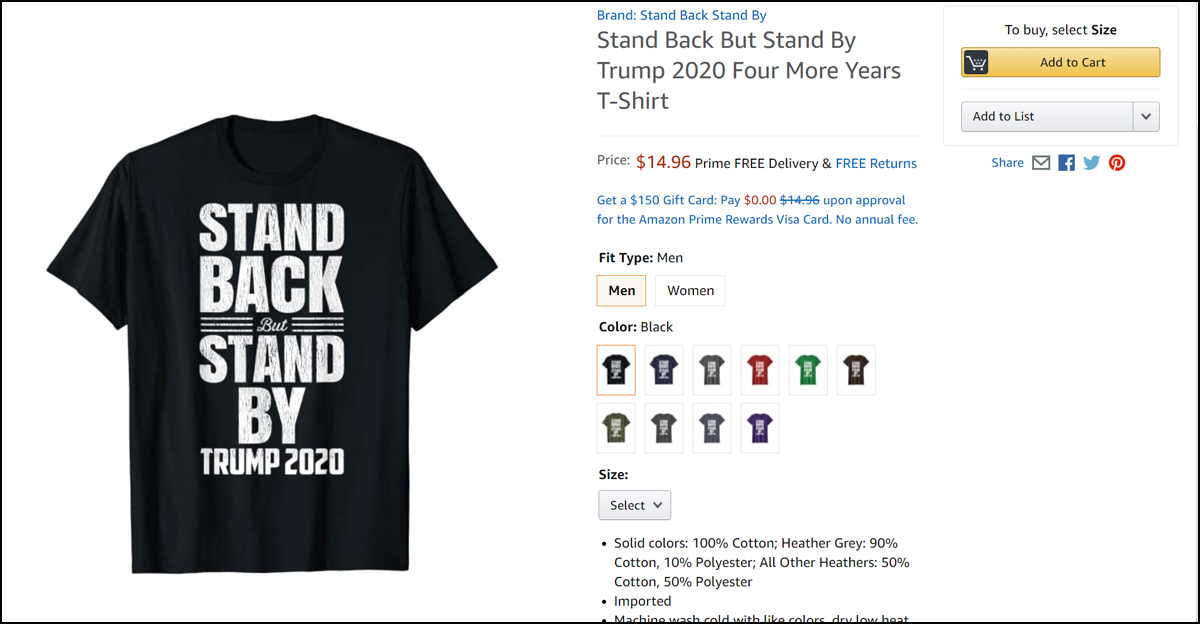 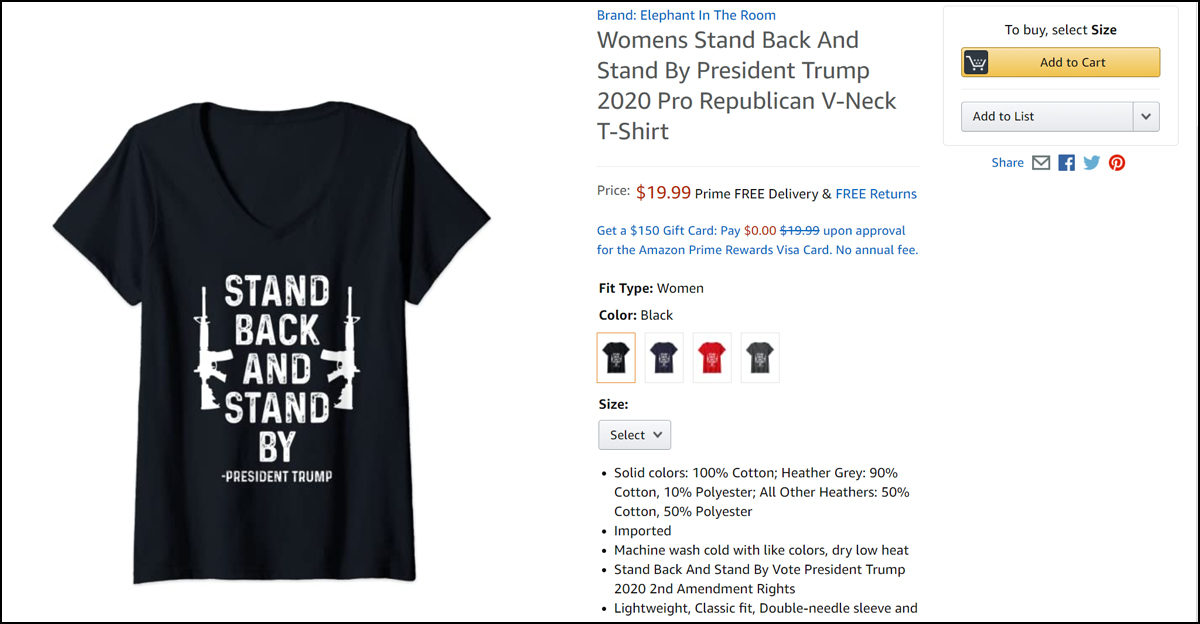 The Proud Boys were founded by Vice co-founder Gavin McInnes. Since 2016 they’ve been involved in multiple violent incidents and confrontations. A member of the group was arrested today, just hours after Trump’s comments, for an incident in August.

This afternoon, President Trump was asked about his remarks as he was departing the White House.