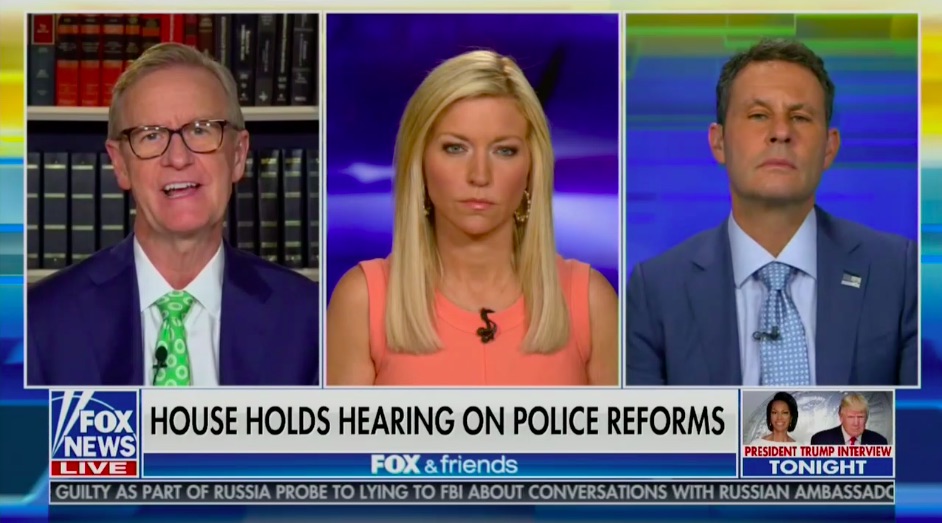 Fox News dominated morning and primetime programming on Thursday in both total viewers as well as those in the coveted 25 – 54 age demographic, but CNN’s ongoing breaking news coverage helped it to win five straight hours in the afternoon in the demo.

According to Nielsen Media Research, Fox & Friends increasingly outdistanced its CNN and MSNBC morning competition from 6:00 a.m. to 9:00 a.m.,, bringing in more viewers in the demo hour by hour with its 255,000, 330,000, and 340,000 viewers. It was similarly strong in overall viewers, although Morning Joe did average more in the 6:00 a.m. hour, eking out a victory with 1.30 million to F&F‘s 1.25 million. But Fox News’ flagship morning show garnered 1.72 million and 1.92 million in the following two hours.

In primetime, Fox News reigned as well, having regained its 8:00 – 11:00 p.m. lead in the demo from CNN last week after enjoying a rare win streak thanks to audience interest in the George Floyd protests. Averaging across the three hours, Fox News scored 693,000 in the demo, while CNN placed second with 542,000, and MSNBC trailed behind with 358,000. In total viewers, Fox surpassed four million viewers (4.04 million), while MSNBC came in with 2.50 million, and CNN failed to reach the two-million mark for the fourth-straight day (1.89 million).

Sandwiched in between Fox’s strong performances was an afternoon where CNN strung together five straight hours of time-slot victories in the demo, from noon to 5:00 p.m. The network’s successes were led by its 2:00 p.m. edition of CNN Newsroom (347,000) and its 4:00 p.m. program, The Lead with Jake Tapper (348,000). During that stretch, Fox News’s best performer Your World with Neil Cavuto came in second at 4:00 p.m. with 322,000 A25 – 54 viewers. MSNBC consistently came in third across this block with its best ratings also coming at 4:00, Deadline: White House’s 248,000. In total viewers, that same show was also MSNBC’s best afternoon performer, achieving an audience of 2.00 million, which effectively tied Cavuto for first place. But that was the lone bright spot for MSNBC, as Fox News easily beat it for the other four hours and CNN trailed far behind both.