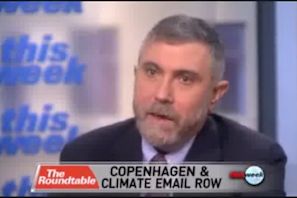 Climategate has slowly but steadily bubbled up from fringe meme on the Internet to hot-button political and scientific cause. Do a set of emails from a hacked climate research server show that global warming is a hoax, or at least an overstatement?

On This Week With George Stephanopoulos, Paul Krugman contended that there was “not a single smoking gun” to Climategate, and that the global warming skeptics using the hacked emails as evidence for their cause need to brush up on their science.

Krugman got a little testy in an exchange with George F. Will, who took a skeptical stance on the “complicated business” of global warming (transcript via Storm2k):

Will: It raises the question of — we’re being asked to wage trillions of dollars and substantially curtail freedom on climate models that are imperfect and unproven. And the consensus far from being as solid as they say it is, and the debate as over as they say it is.

The e-mails indicate people are very nervous about suppressing criticism, gaming the peer review process for scholarly works and all the rest. One of the e-mails said it is a travesty, his word, it is a travesty that we cannot explain the fact that global warming has stopped. Well, they shouldn’t be embarrassed about that. It’s a complicated business, and that’s why we shouldn’t be (inaudible).

Krugman: All those e-mails — people have never seen what academic discussion looks like. There’s not a single smoking gun in there. There’s nothing in there. And the travesty is that people are not able to explain why the fact that 1988 was a very warm year doesn’t actually mean that global warming has stopped. I mean, that’s loose wording. Right?

Everything is about — we’re really in the same situation as if there was one extremely warm day in April. And then people are saying, well, you see, May is cooler than April, there’s no trend here. And that’s what — the travesty is how hard it has been to explain…

Watts Up With That has links to the full trove of hacked emails and text from a few of the most relevant.

If anyone should know what real academic discussion looks like, it’s Krugman, who had a brilliant career in economics before he became a fiery Times op-ed columnist.

In fact, some of the criticism that Krugman got when he turned his economic expertise to an outspokenly liberal agenda illustrates a principle at the heart of Climategate: laypeople tend to be deeply bothered when scientists, who are supposed to be objective and above the fray, try their hands at politics. If you read something or other that you don’t understand in a Krugman column about how regression models show that the economy is moving in such-and-such pro-Obama or anti-Bush direction, is it possible to take him at his word? It’s so much easier to agree or disagree based on your own preconceived political beliefs: but then, what’s the point of Krugman’s expertise in the first place?

And so it is with Climategate: some smug, troubling language about “tricks” and “hid[ing] the decline” makes it sound like some climate scientists were gaming their research. But in the backlash to those emails, people who do not understand the messy business of science are quick to jump to far bigger conclusions about global warming and climate science than the handful of hacked emails really justify.