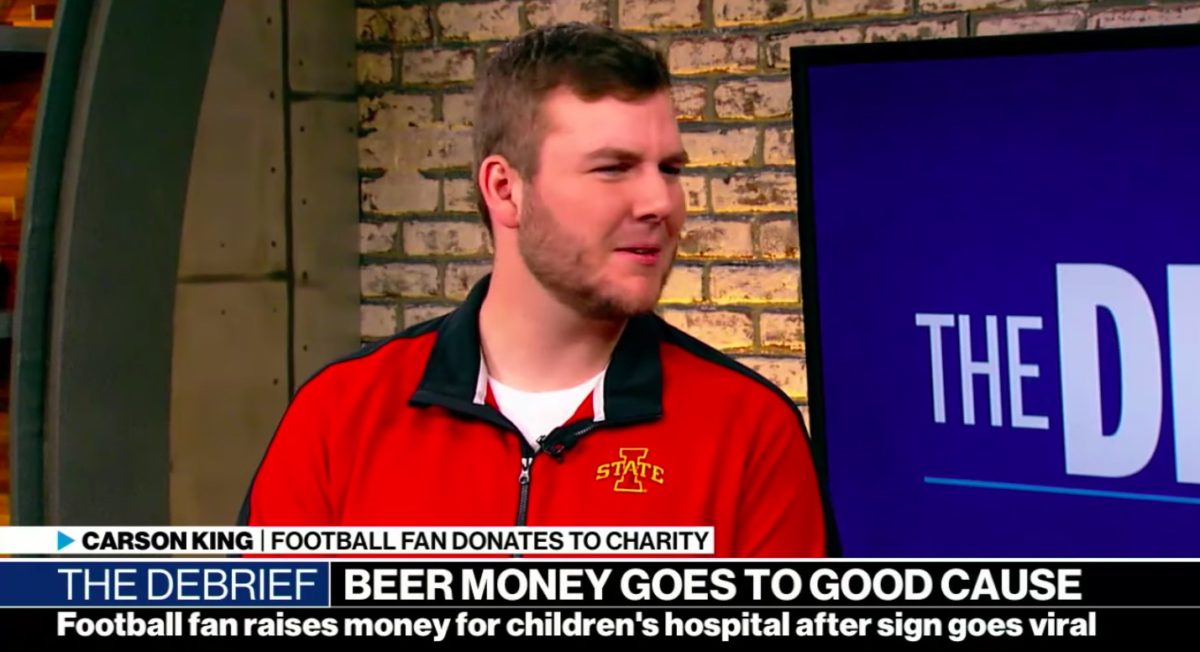 The Des Moines Register is facing a fierce public backlash after publishing a profile on Carson King, an Iowa man who used his viral moment on ESPN’s College Gameday to raise $1 million for charity, that dug up his years-old offensive tweets.

King became an online sensation over the weekend after holding up a sign on College Gameday‘s telecast in Ames, Iowa that asked for Venmo donations for his Busch Light supply. After receiving a flood of money on the mobile payment app, the 24-year-old decided to donate to the University of Iowa’s Stead Children’s Hospital instead of buying more beer. Venmo and Anheuser-Busch joined in with the football fan’s cause by matching every donation he received for the impromptu charity campaign, which netted $1.12 million.

Hey #cyclONEnation! I just wanted everyone to know I’m listening to @CycloneFB from NYC! We’re st over 873,000.00 total contributions after @BuschBeer and @venmo. pic.twitter.com/WooOJDd7zL

Despite the positive aspects of the story, Iowa’s largest newspaper opted to sift through King’s social media profiles — an action the Register described as “a routine background check” — and found racially offensive tweets King posted in 2012, when he was 16 years old. After being notified of the old posts, King profusely apologized, said the tweets made him feel “sick,” and took them down. But the Register went forward with publishing the tweets in their profile. King said the comments are “not something that I’m proud of at all” and explained that he is “embarrassed and stunned to reflect on what I thought was funny when I was 16 years old.”

But the damage was already done.

While Anheuser-Busch InBev honored their promise to match King’s charity donations, the beverage company cancelled their official partnership with him.

After the Register‘s report was widely condemned as a hit piece and critics described it as representing the worst of so-called “cancel culture,” the paper’s executive editor was compelled to release a statement defending the publication’s editorial decisions.

“Should that material be included in the profile at all? The jokes were highly inappropriate and were public posts,” wrote the Register‘s Carol Hunter. “Shouldn’t that be acknowledged to all the people who had donated money to King’s cause or were planning to do so?”

Hunter also noted that King came forward to apologize for the posts before the Register published their report; though, it appears that King only came forward in an attempt to get ahead of the story after the paper had already approached him for comment.

A statement from our editor: pic.twitter.com/ZH9AhcrYbg

Ironically enough, Aaron Calvin, the Register reporter who found King’s tweets and reported them out, has his own history of old racist remarks on Twitter. In tweets from years ago that were deleted shortly after Twitter sleuths unearthed them, Calvin used the N-word numerous times and mocked gay marriage by joking that he’s “totally going to marry a horse” after the Supreme Court’s Obergefell v. Hodges case. Calvin made his Twitter account private on Tuesday night and issued an apology: “Hey just wanted to say that I have deleted previous tweets that have been inappropriate or insensitive. I apologize for not holding myself to the same standards as the Register holds others.”

In turn, the Register announced an investigation into Calvin’s offensive comments.

The Register is aware of reports of inappropriate social media posts by one of our staffers, and an investigation has begun.

King further explained his side of the controversy in a follow up tweet: “The Des Moines Register has been nothing but kind in all of their coverage, and I appreciate the reporter pointing out the post to me. I want everyone to understand that this was my decision to publicly address the posts and apologize. I believe that is the right thing to do.”

Carson tells me he knew at 2:16PM that @BuschBeer was severing ties after tweets brought to its attention.

Busch Light Carson King T-shirt links, with proceeds to @UIchildrens, down by 5 PM.

Press conference didn’t even start until 7 PM. It was not why Busch ended relationship. https://t.co/blImJXf0vz

If Carson King had been defiant about the two tweets from when he was 16 or doubled down, I would get why the Register would mention them but according the paper, he was deeply remorseful. I fail to see how it was newsworthy, especially given the good work he’s been doing

“Hey, this Carson King guy raised $1 million for a children’s hospital. Let’s see if we can find anything bad he might have posted as a teenager and spoil this kindness for everyone!”

Seriously, what is wrong w people? Who does this? Who thinks this way? Get a life.

How Media Covers America vs. Themselves:

– @DMRegister finds offensive tweets from when he was 16. Wrecks his life.

Gotta say this @aaronpcalvin /Carson King story is the one of the most amazing Cancel Culture boomerangs ever tossed by a terrible person at a good kid. If Calvin has his job tomorrow, you’ll know the @DMRegister is an organization w/o any standards other than “it’s okay for us.”

Carson King, the young man whose beer plea sign at the Iowa-ISU game led to over $1 million dollars in donations for the U of Iowa Children’s Hospital, is under fire for making a racist tweet at age 16 in 2011. I am seething with anger. https://t.co/PpPxucpdFD

A Des Moines Register reporter digs up tweets of a 16 year old Carson King – the dude who raised $1 million+ for child cancer – and prepares to expose him.

The internet does their own digging on the reporter and guess what they find? https://t.co/uDsB2wbI1j pic.twitter.com/nZ1bujXmW9

Why https://t.co/mbLjpR0TSj thought Carson King needed a “routine” social media check going back 8 years because of his generosity is beyond me. If you’re bored at work, find a story. Don’t try to ruin people.