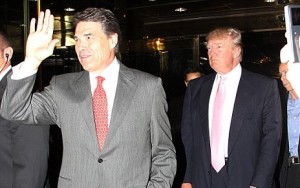 Just when you thought it was safe to take Orly Taitz off of your producer’s speed-dial, Texas Gov. and struggling Republican presidential candidate Rick Perry throws a “Birther” Hail Orly in a Parade Magazine interview. Months after President Obama crushed then-GOP frontrunner Donald Trump by producing his long-form birth certificate and Osama bin Laden‘s long-form corpse, Perry told Parade that he had no idea if the document was real, and that he hopes to secure The Donald’s endorsement.

Perry’s thinking on the matter appears to have been influenced by a recent dinner with Trump. Here’s what he told Parade:

Governor, do you believe that President Barack Obama was born in the United States?

I have no reason to think otherwise.

That’s not a definitive, “Yes, I believe he”—

Well, I don’t have a definitive answer, because he’s never seen my birth certificate.

But you’ve seen his.

You don’t believe what’s been released?

I don’t know. I had dinner with Donald Trump the other night.

I don’t have any idea. It doesn’t matter. He’s the President of the United States. He’s elected. It’s a distractive issue.

Elsewhere in the interview, asked if he thinks Trump will endorse his candidacy, Perry said, “You’ll have to ask him, but I’d certainly like to have the Donald’s support. He is a job-creating machine, and that’s what I’m all about.”

In September, ThinkProgress reported that Perry encountered “Birther Queen” Orly Taitz at a campaign event, and according to Taitz, Perry was sympathetic to her cause. While observers familiar with Taitz might not have given her account much weight at the time, Perry’s remarks to Parade certainly cast that encounter in a different light.

Trump’s run at the top of the polls was a serious embarrassment for Republicans, and bringing back the Birther issue, especially now that the President has laid the issue to rest in the minds of sane people, could become a similar embarrassment to the current GOP field. If Perry gets some traction behind this, look for everybody but Mitt to take another run at this thing.