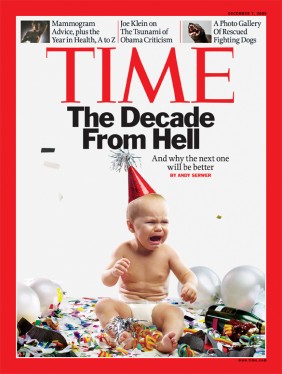 We are about to head into six weeks of non-stop, end-of-decade countdown and highlight lists. Newsweek got a head start on the competition with their much passed-around the decade in seven minutes, but that is no doubt just the tip of the iceberg of what’s to come between now and December 31. Granted it’s been a helluva a decade. Or, according to Time ‘The Decade From Hell,’ which is the moniker they’ve opted to give it.

Bookended by 9/11 at the start and a financial wipeout at the end, the first 10 years of this century will very likely go down as the most dispiriting and disillusioning decade Americans have lived through in the post–World War II era. We’re still weeks away from the end of ’09, but it’s not too early to pass judgment. Call it the Decade from Hell, or the Reckoning, or the Decade of Broken Dreams, or the Lost Decade. Call it whatever you want — just give thanks that it is nearly over. (See TIME’s photo-essay “The 10 Worst Things About the Worst Decade Ever.”)

Calling the 2000s “the worst” may seem an overwrought label in a decade in which we fought no major wars, in historical terms. It is a sadly appropriate term for the families of the thousands of 9/11 victims and soldiers and others killed in Iraq and Afghanistan. But the lack of a large-scale armed conflict makes these past 10 years stand out that much more. This decade was as awful as any peacetime decade in the nation’s entire history. Between the West’s ongoing struggle against radical Islam and our recent near-death economic experience — trends that have largely skirted much of the developing world — it’s no wonder we feel as if we’ve been through a 10-year gauntlet. Americans may have the darkest view of recent history, since it’s in the U.S. that the effects of those trends have been most acute. If you live in Brazil or China, you have had a pretty good decade economically. Once, we were the sunniest and most optimistic of nations. No longer.

Wow, cheerful huh? Before you decide to throw in the towel entirely (and yes, admittedly between the aforementioned, and Katrina, Iraq, and Wall St. it wasn’t such a stellar ten years) let’s take a small, glass half full approach. Because the Aughts (or whatever we end up calling them) was also the decade that brought us…I was going to say the Internet but obviously we already had that. So how about: the blog, the iphone, YouTube, iTunes, Twitter, Facebook, and Google chat. Just to name a few. However, those few have as fundamentally changed the way we live our lives and interact with the world as anything else that has happened since Jan 1, 2000 — arguably in a mostly productive way that will only get more so as we go boldly forward into the Tweens! Also, I think it’s worth mentioning on the glass-half-full front that the nation elected its first black president this decade, an accomplishment that appears to have recently got lost in the partisan furo that has recently taken over the nation, but as I recall, was a pretty happy event for most last January.