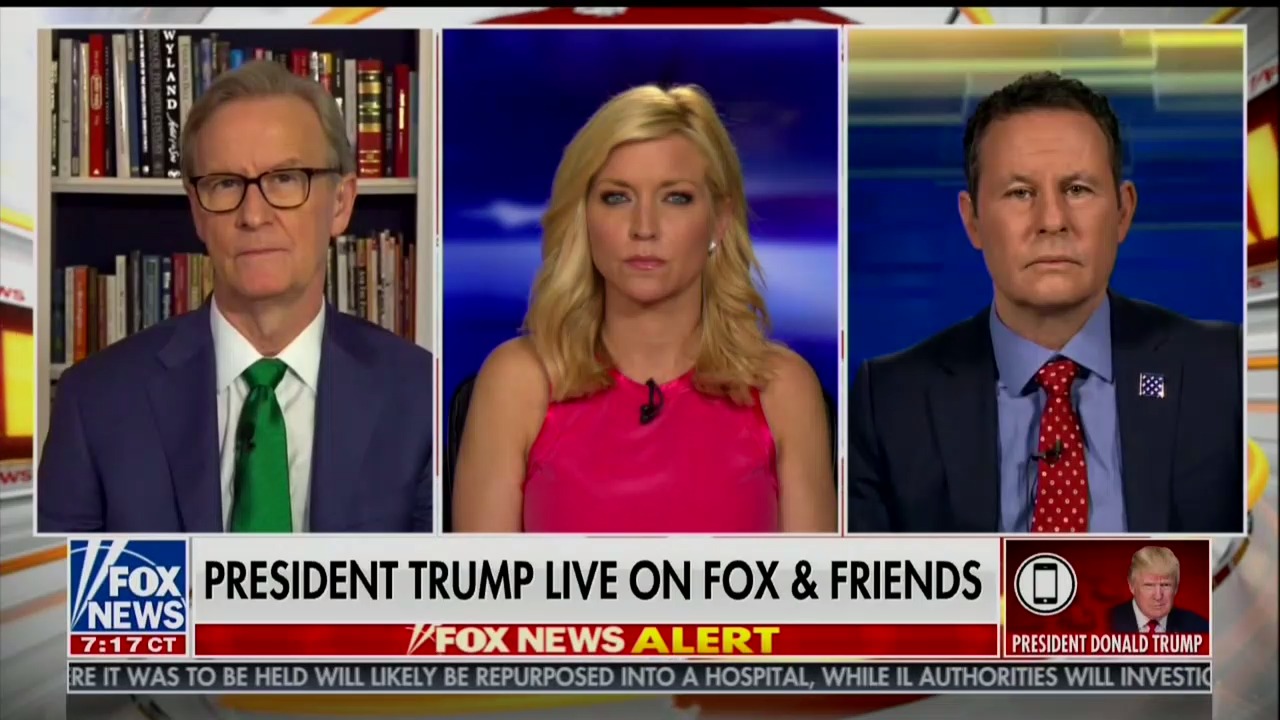 President Donald Trump, Monday morning, called into Fox & Friends to deliver an update on the coronavirus outbreak. But on several occasions during the 50-minute session, the president veered wildly off course — unleashing venom on a variety of targets including; Nancy Pelosi, Andrew Cuomo, the Washington Post and Germany.

Here’s a look at five key moments from the conversation:

The president explained that he leaned on two key members of his coronavirus task force, Dr. Anthony Fauci and Dr. Deborah Birx, in his decision to extend social distancing guidelines to April 30.

“I listen to experts,” Trump said. “We have Dr. Fauci. As you know, we have Deborah Birx, who’s fantastic also. The two of them, plus many people behind them. And the worst that could happen is you do [lift the restrictions] too early and all of a sudden [the virus] comes back. That makes it more difficult.”

The president went on to reiterate comments he made during a Sunday afternoon White House news conference — that he expects the peak of the death toll from the virus to come in approximately two weeks, and that by June 1, it should be a “very low number.”

2. Trump Downplays Andrew Cuomo’s Soaring Approval Ratings While Crowing About His Own Numbers

Governor Andrew Cuomo (D-NY) has gotten wide praise for his handling of the crisis in New York. President Trump, on Monday, sought to take credit for Cuomo’s poll bump, while touting his own numbers in the process.

A new Siena College poll shows Cuomo’s favorability up to 71 percent from 44 percent last month. Various major surveys, meanwhile, put Trump’s favorability at roughly the 50 percent mark. Yet the president classified his own numbers as “great,” while categorizing Cuomo’s as “good.”

Trump proceeded to argue that the Federal government response is a main reason why the public is happy with Cuomo’s handling of the crisis.

“One of the reasons his numbers are high on handling it is because of the Federal government,” Trump saaid. “Because we give him ships, and we give him ventilators, and we give him all of the things that we’re giving him … We’re giving him four hospitals and four medical centers and all of the things that we’ve done. So, I mean, one of the things, and I think he’d admit this, one of the reasons he’s been successful, if I said, ‘No, we’re not giving you four hospitals, and we’re not giving you four medical centers, and we’re not sending you a ship,’ and we didn’t give them thousands of ventilators, by the way, and millions of masks, because we’ve sent them a lot of stuff, well one of the reasons he’s successful is because we’ve helped make him successful.”

The president was irate when confronted with a remark from House Speaker Nancy Pelosi (D-CA) — who said that Trump’s initial “denial” relating to the coronavirus was “deadly.”

“Look, she’s a sick puppy in my opinion,” Trump said. “She really is. She’s got a lot of problems.”

He added, “Don’t forget, she was playing the impeachment game. Her game where she ended up looking like a fool. She was doing nothing but — all she did for the first long time was impeach, impeach, impeach. This went on for years, if you think about it. That’s all she did. She didn’t do anything.

Even after Fox & Friends co-host Ainsley Earhardt asked an unrelated question, Trump went back to torching Pelosi, and threatened a federal takeover of her District.

“The federal government, we may get involved and take over that area and clean it up,” Trump said. “It’s such a mess, it’s so bad, and yet she will sit there and complain. All she did was focus on impeachment. She didn’t focus on anything having to do pandemics. She focused on impeachment and she lost! And she looked like a fool!”

The president defended China after a Washington Post editorial blasted that country for spreading disinformation about the coronavirus.

Fox & Friends co-host Brian Kilmeade was not willing to give China the benefit of the doubt.

“Well I believe they’re doing it,” said.  “But you know China has already done this.”

Trump, astonishingly, replied “They do it and we do it, and we call them different things.”

Later, he revisited his scathing critique of the Post.

“They will do anything they can to hurt this presidency, and yet, here we are with the best numbers we’ve ever had. I don’t even understand it when you can get such fake news from. The New York Times is a totally dishonest paper, they are dishonest people. Washington Post, same thing. I’m trying to figure out for three and a half years, who is more dishonest, who is more corrupt? The Washington Post or the New York Times. When I figure it out I’ll let you know we’ll have a special.”

5. Trump Seethes Over Question on Russia From Brian Kilmeade, Rants About Germany

A question from Kilmeade about Russia towards the end of the conversation set Trump off, and paved the way for yet another diatribe — this time against Germany.

“I know you’re not concerned about speaking to people that have shown to be enemies of our nation,” Kilmeade said, following up after Trump disclosed he’d be speaking with Vladimir Putin later in the morning. “For example, Russia, they earned the right to be sanctioned. They’re poisoning people. You know what they’re doing in Eastern Europe, rattling the cages of their former Soviet Union countries. And we know in the Middle East, creating havoc killing refugees in an indiscriminate fashion, as well as creating havoc in Iraq. But when you talk to Vladimir Putin he’s going to ask you to lift sanctions. What are you going to say when he asks that?”

Trump’s voice rose, as he was clearly displeased by the query.

Trump went on to tell Kilmeade “you make it sound like, gee whiz, I’m the soft guy that came along.”

The president went on to say that while Russia is not “perfect,” they “were our partner in World War II” — which set him up for a rant about a country which was not an American ally.

“Germany was the enemy, and Germany is like this wonderful thing [now],” Trump said. “Well, Germany takes advantage of us on trade for years. They pay far too little in NATO. They are paying one percent but they are supposed to pay two percent and nobody talks about that.”