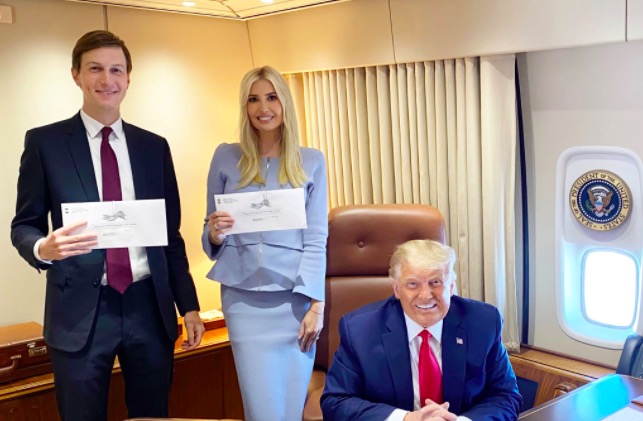 Ivanka Trump and Jared Kushner beamed as they proudly posed with their mail-in ballots for the 2020 presidential election alongside the president on Air Force One Monday afternoon. But just hours later, President Donald Trump had resumed his attempts to undermine faith in the practice.

“Big problems and discrepancies with Mail In Ballots all over the USA. Must have final total on November 3rd,” Trump tweeted, in a post that was slapped by Twitter with a “disputed” information tag and hidden. 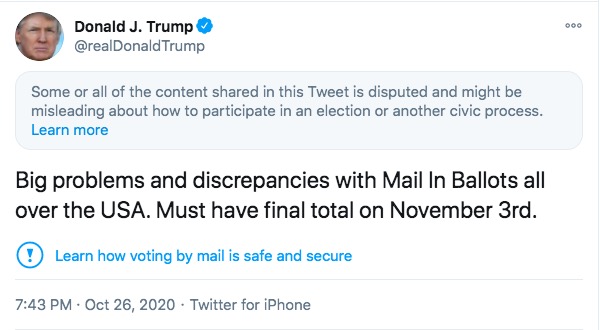 As millions of Americans plan to vote by mail in the 2020 election, amid the coronavirus pandemic, Trump has campaigned on the false claim that mail-in voting is riddled with fraud. His campaign has gone so far as to challenge states in court over their mail-in ballot programs.

Trump’s demand that a final total be delivered on November 3rd is also baseless. Official results have never been completed and certified on the night of the election. In many states, ballots simply have to be postmarked by November 3rd. The current pandemic is expected the delay the final count of votes more than usual.

The president’s tweet was decried as part of his ongoing effort to delegitimize ballots not counted by the end of Election Day.

On Monday, Ivanka Trump posted a photo of herself and husband Jared Kushner brandishing absentee ballots alongside her boss and father, the president. The couple registered as Republicans for the first time earlier this year, after previously being registered Democrats in New York.

Trump himself voted by mail in the Florida primary in August, but cast his ballot in the general election in person on Saturday.

A whopping 87 million voters have requested mail-in ballots for the 2020 election, according to the U.S. Elections Project, a database run by University of Florida professor Michael McDonald.