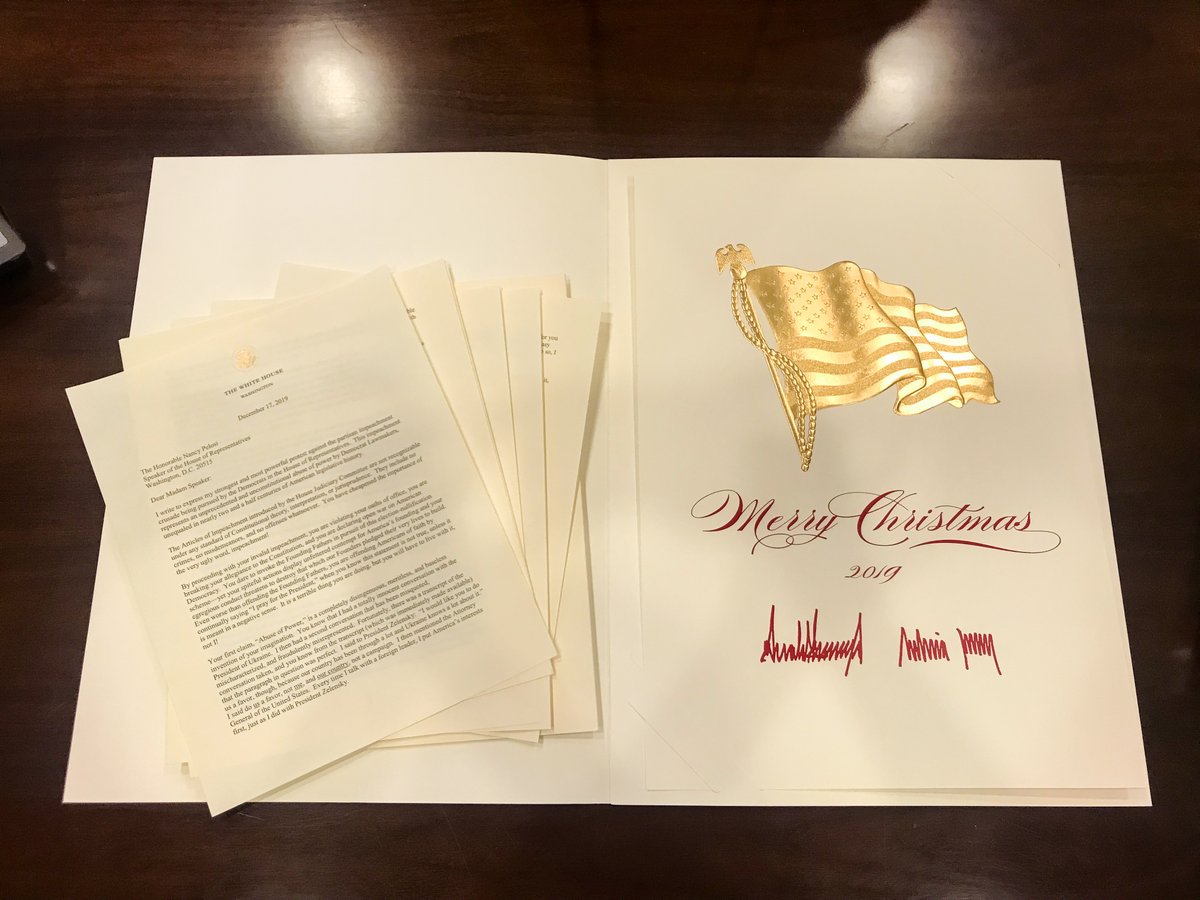 The White House is handing out Christmas cards accompanied by a print out of President Donald Trump’s wild letter assailing the impeachment probe, according to several Democratic senators.

Sen. Chris Murphy (D-CT) posted a photo of the odd “package” on Twitter, writing that a White House staffer had delivered it to his office. The package contained two Christmas cards (one “giant,” one small) as well as Trump’s furious six page letter to House Speaker Nancy Pelosi.

“What a day,” Murphy wrote, as the House debated impeachment ahead of a vote Wednesday night that’s likely to see the president impeached.

True story: there is a White House staffer going around the Senate delivering to each office, as a package, the incoherent, scathing Pelosi letter AND…wait for it…a giant 16×12 White House Christmas card (along with, implausibly, a second smaller Christmas card).

Trump’s furious letter blasted Democrats for “perversion of justice” in the impeachment process, which he said had less due process than “the Salem Witch Trials.” It was riddled with falsehoods, earning an extensive fact check from the New York Times that included a correction on his electoral college victory in 2016.

“Thanks for this card & your 6 page impeachment screed,” he wrote. “Bizarrely delivered together. Happy Holidays & best wishes for the coming year!”

Thanks for this card & your 6 page impeachment screed. Bizarrely delivered together. Happy Holidays & best wishes for the coming year! pic.twitter.com/kUDektXMvt

Sen. Chris Van Hollen (D-MD) posted a sort of unboxing of the “jumbo” card, and said Trump went “off the deep end” in his Pelosi letter.

In yet another bizarre day in the Trump Winter Wonderland, the White House delivered their annual holiday package: An extremely oversized card, another small card, and…. his 6-page screed to @SpeakerPelosi where he goes off the deep end. You can’t make this stuff up. pic.twitter.com/9TOHrNqR5V