Trump Tweets Two Minute Video of Himself Dancing to YMCA 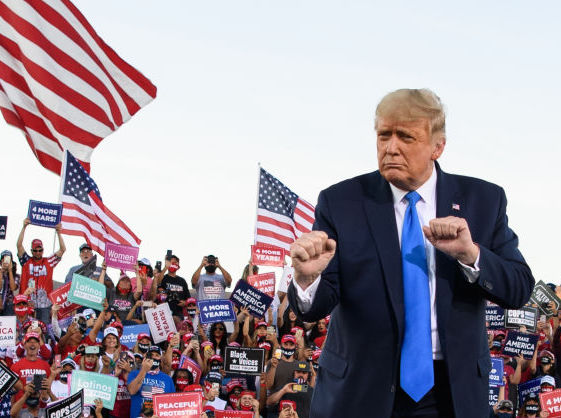 President Donald Trump’s closing argument in his bid for presidential reelection appears to be a two-plus minute montage of dancing to The Village People’s YMCA. That’s it. That’s the tweet.

Trump added his own message of “VOTE! VOTE! VOTE!” to a video credited to the self-described “Digital Graffiti” artist and Twitter user Som3thingwicked.

Future historians will almost certainly point to this tweet as evidence of a remarkable disconnect between the Commander in Chief joyfully dancing mid throngs of supporters joyfully ignoring public safety guidelines of social distancing and mask-wearing — while at the same time, a pandemic has taken the lives of over 230,000 American lives.

The federal response to the coronavirus—and the cratered U.S. economy from our inability to abate the spread — is the single biggest issue in this presidential election. On Friday before the vote, the United States saw a record number of infections, more than any other date since the pandemic started. And yet, President Trump shares a video of his celebratory dancing, which you can watch below.

Trump used to close his rallies with The Rolling Stones curiously You Can’t Always Get What You Want, but amid complaints from Mick Jagger and Keith Richards, or perhaps just a desire to mix it up in the 2020 run, the Trump Campaign began playing YMCA at the end of his rallies.

YMCA is, of course, a barely-coded gay anthem from the late 70s that celebrates locker room culture for a then-closeted community and was recorded long before the effects of The Stonewall Riots and the movement it sparked resulted in the gay rights that we now enjoy today.