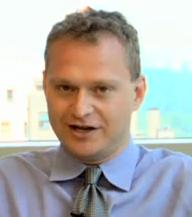 David Javerbaum is the “Consulting Producer” of The Daily Show, which is what they call you when you’ve been writer, Head Writer, Supervising Producer, tried to quit to write the lyrics for a Broadway musical, got called back to be Executive Producer, did that for a few years, got nominated for a Tony for that musical, wrote for the Oscars, collected a few Emmys and Peabodys, consulted on The Colbert Report, wrote the lyrics for A Colbert Christmas, got nominated for another Emmy, joining yet another Emmy nomination for The Daily Show, which is evidently pretty hard to leave. (Confused? Follow along here.) He is also the author of the new not-related-to-the-Daily-Show-at-all book, What To Expect When You’re Expected: A Fetus’s Guide to the First Three Trimesters, which will be released next month by Spiegel & Grau. Clearly, in addition to being very funny, he is also very potent. How potent? Judge for yourself in this latest installment of 5QQ – Five Quick Questions.

Every morning our condo crier gallops up to the lobby, rings his handbell, shouts “Oyez!,” and declaims the headlines.

If the media hadn’t been so busy serving its own base commercial self-interest, it might have spent more time promoting my new book What to Expect When You’re Expected: A Fetus’s Guide to the First Three Trimesters, available October 13.

As a comedy writer, when I come home after a long day, the last thing I want to see is more comedy. So Leno.

Glenn Beck, but only from his innocent pre-Maharishi days.

“I AM GOING TO SHOVE THIS FUCKING BALL DOWN YOUR FUCKING THROAT!” or “YOU LIE!”?

As a pre-coital remark, both seem equally mood-killing.

Ah, trying to play “Gotcha!”, are we? Well, I won’t fall for it. Both men are talentless frauds.

4. Are you on Twitter? Describe yourself in 140 characters or less:

I am a comedy writer with a decidedly antidisestablishmentarian bent, free of pneumonoultramicroscopicsilicovolcanoconiosis, who… dammit!

Excited. I believe that with regards to musical theater, somethin’s comin’; and, by all accounts, that somethin’ is good.

Learn more about Javerbaum and his book here, and if you didn’t get that last line, educate yourself here. Oh, and follow him on Twitter as an unborn fetus here.