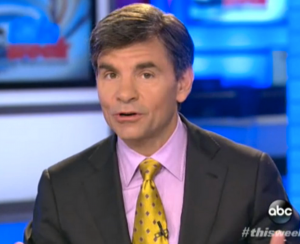 George Stephanopoulos needs to remove himself from ABC’s This Week on Sunday mornings immediately. And if he won’t do it himself, ABC News management — starting with ABC president James Goldston — needs to do it for him.

Why? Because Stephanopoulos, a former senior advisor to President Bill Clinton, apologized today for not disclosing $75,000 in contributions to the Clinton Foundation.

We talk about optics in this space regularly, and when ABC News’ chief anchor and host of its Sunday morning political talk show donates to the likely Democratic nominee’s charitable foundation and doesn’t reveal that fact before every interview he does with anyone seen as an enemy or competitor of the Clintons, it’s hiding in clear sight an obvious conflict of interest.

More than a few people in the business wondered aloud why Stephanopulos conducted such a partisan interview with Peter Schweizer, the author of Clinton Cash. It was as if we were witnessing the 1993 version of George, the one who served as de facto press secretary for the Clinton administration, trying to destroy a narrative as if he was getting paid to do it. In case you missed it, Schweizer’s credibility was attacked for the entire interview while exactly zero of his claims about the Clintons were even remotely entertained by the host — the same who contributed to the very foundation in question.

Regardless of whether a donation to a charitable foundation has any effect on the way the anchor and moderator went/goes about his business in covering the 2016 is completely besides the point. Keith Olbermann — you may recall — got fired for donating to two Democratic congressional campaigns a few years ago (at least that was the excuse given by MSNBC brass to end the rocky relationship).

To that end, nobody is saying Stephanopoulos should be fired for this. But a suspension certainly makes sense given his failure to disclose the three donations he made ($25K each) over a three-year span, and the poor light this sheds on ABC, currently #1 in the primetime news race. And when he returns, Martha Raddatz should take his seat out of the This Week bullpen, which she’s already used to doing on occasion. As for his hosting GMA, that can go on after the suspension because serious politics are discussed less and less on the program.

Is all of this too harsh? Not even close.

Because the next time Stephanopoulos goes at a Sens. Paul or Cruz or Rubio or Govs. Bush or Huckabee or Dr. Carson or (insert 10 other candidates here) hard, half the audience will simply scream bias, even if the donation and his former occupation in the Clinton White House has no bearing on how the anchor performs his duties. And on cue, here’s what Rand Paul had to say to the New York Times today:

It’s impossible to divorce yourself from that, even if you try. I just think it’s really, really hard because he’s been there, so close to them, that there would be a conflict of interest if he tried to be a moderator of any sort.

To his credit, Stephanopoulos has declared he won’t be moderating any debates. But it isn’t quite enough. He could have disclosed the donations last year, the year before. He could have said it was for a good cause. He could have also donated to a Bush charity to even the score and eliminate any image of impropriety.

Instead, the face of ABC News got caught and apologized after the fact. For that, he should be put on mandatory vacation for a week or two.

And when he comes back, enjoy his newfound Sundays off.