ABC Reporter Attempts To Explain The Budget With $100 In Pennies 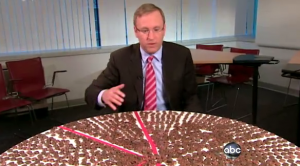 Give ABC’s Jonathan Karl some credit. The guy’s creative–and willing to risk the snarky ridicule of those media websites. In an effort to explain the federal budget, Karl got his hands on $100 in pennies, and then proceded to cover a conference room table with them–all divided up according to the spending in the president’s budget. Kinda makes your head hurt just thinking about doing that, right?

Each penny on the table represents $400 million in taxpayers’ money. Each pile of five pennies equals $2 billion. And yet why does my brain resist such information with thoughts of taking my arm and sweeping the entire pile of pennies onto the floor?

But seriously, the demonstration did more than just take a table out of rotation for a while at ABC and get Karl’s fingers all penny-scented. He walked ABC World News viewers through the amount of money that needs to be borrowed, how much is allocated for defense and security spending, entitlement like social security and Medicare, and the amount set aside just to pay for the interest on the debt. He also used his penny collection to demonstrate just how little can be saved with some popular proposed budget cuts, like cutting the Great Lakes Restoration Initiative by $125 million. That only takes a third of a penny off the table (get it? off the table!).

“One more thing Diane, the pennies themselves are a waste of taxpayer money — each one cost more than 1 cent to make.”