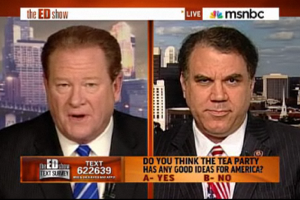 “Progressive warrior” and eccentric Orlando Congressman Alan Grayson made his usual round on MSNBC’s The Ed Show yesterday to talk to Ed Schultz‘s audience about the ongoing struggle between him and the giant corporate enterprise that “couldn’t buy me, and now they’re trying to destroy me” (by which he means his reelection campaign). Turns out he is strongly opposed to negative campaign ads!Claiming that his opponent, like many in the Tea Party, are using Fox News “like an ATM,” Grayson explains that he is fighting the good fight by “telling the truth,” and that being that “we had a Tea Party president for eight years” and the people running against him and other progressives have “the same sort of beady eyes, same sort of vacant look.” And, beyond that, their negative campaign ads are merciless:

Grayson’s ads, on the other hand stick to the issues, like connecting his opponent to both the Taliban and the Florida chapter of the Soprano family (who knew they had one down there?). Schultz respond’s to Grayson’s comments by praising his “guts” and noting that, “because you’ve had success in life… you’ve got them really afraid.” He did bring up the Sopranos ad, though, and ask if it was too over-the-top, to which Grayson answers that “they are trying to destroy me.”

The segment from yesterday’s Ed Show via MSNBC below: