Rosie O’Donnell On The View Fiasco: All Bill O’Reilly Does Is ‘Incite Hatred’ 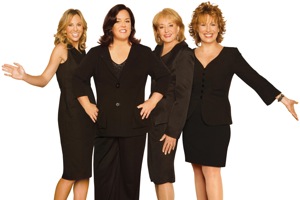 The recent scuffle between Bill O’Reilly and the ladies of, of all shows, The View, has rekindled an image of O’Reilly as a hard-line, aggressive conservative voice that many thought had mellowed out as of late. Many were surprised that it would happen in such a venue, but former The View co-host Rosie O’Donnell seemed bored with O’Reilly and what she perceives to be his antics.

O’Donnell commented on the affair on her Sirius satellite radio program along with her regular panel, most of whom seemed much more shocked about the affair than she did. Her voice dripping with boredom, she asked rhetorically, “What does he do besides incite hatred? What does he do besides that?” She got some agreement on the panel, especially on the point that he was on the program to promote his new book Pinheads and Patriots, which is at least being branded as a divisive political text. O’Donnell continued, almost putting the blame on The View itself and not on O’Reilly, though clearly not a fan of his style: “That’s what Bill O’Reilly does. Why would you book him?”

Her vague “that’s what he does” point stands pretty firmly on his own. Bill O’Reilly’s job is to debate politics, and it seems a bit silly that someone engaging him in politics would feel the need to embarrass themselves by running away from him when he begins to talk politics. But “incite hatred”? To the extent that Rosie O’Donnell has attempted to craft a political public identity, it’s difficult to see what Bill O’Reilly does (again, talk politics) as much different than what O’Donnell dabbles in, unless she is willing to own up to “inciting hatred” herself. Other than the fact that O’Reilly has the experience and educational backing O’Donnell lacks to give him a rightful pedestal from which to discuss politics, the level of controversy of comments from either have often been interchangeable, ideology aside.

O’Donnell also looked back on the show itself, explaining that “it’s such a strange atmosphere at that show, I don’t think that it can be articulated,” and standing up for Whoopi Goldberg and Joy Behar against Barbara Walters‘ “scolding,” reminding the audience that Whoopi Goldberg has won several awards, and Joy Behar is “60 years old.”

The audio from her satellite radio program below: