Alan Grayson Releases Video of Alleged Domestic Dispute with Wife: ‘She Hit Me’ 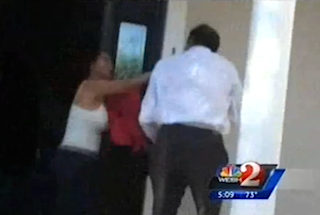 Rep. Alan Grayson (D-FL) is fighting back against accusations that he physically injured his wife, Lolita Grayson, during an altercation this past Saturday. A Florida judge granted her a temporary protective injunction against her husband, but now attorneys for the congressman has released a video that they say shows he was the victim.

While Lolita Grayson’s injunction claims that her children have been “battered or threatened” by Rep. Grayson and that her husband has prevented her from leaving their house before, the congressman’s lawyers are denying those accusations. Juan Lopez, who works as Grayson’s director of constituent services, shot cell phone video of the couple’s altercation Saturday.

In the video, which is included in the local news report below, you can see Lolita Grayson preventing her husband from going inside and at one point shoving him back away from the door. The congressman apparently asked his aide to accompany him to his home and film the interaction because his wife has been “acting erratically” since they began divorce proceedings.

Rep. Grayson briefly spoke to reporters about the incident on Wednesday afternoon as he was leaving the House chamber in Washington. “It simply isn’t the way she described it,” Grayson said of his soon-to-be-ex-wife’s story. “She hit me and I retreated. That’s what happened.” He added, “She’s simply lying and I think that our statement makes that clear.”

Earlier, Grayson’s communications director sent out the statement below:

“It has come to our attention that Ms. Grayson has filed a completely dishonest complaint against Congressman Alan Grayson regarding personal matters that took place last week. These allegations are absolutely false, completely unfounded, and clearly designed to vilify and harm Congressman Grayson.”

Watch video below, via WESH: