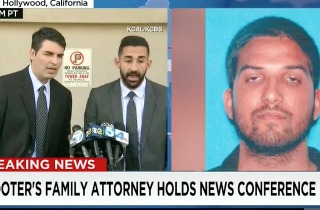 Attorneys for the Farook family held a presser this afternoon on the San Bernardino shooting and downplayed the suggestion that shooters Syed Farook and Tashfeen Malik had terror ties.

Mohammed Abuershaid and David Chesley made it clear that the rest of the Farook family had no idea the two of them were planning to kill people, and they repeatedly insisted that there’s no “factual link” between them and terrorism. They suggested it was more a workplace violence matter, repeatedly noting how Farook had said he had been made fun of for his beard.

In one of the more bizarre exchanges, Chesley responded to reports that one of the shooters pled allegiance to ISIS on Facebook by saying just because people look something up on Facebook “doesn’t mean they believe it.” As an example, he cited his own looking up of Britney Spears despite not being a big fan.

But one thing both attorneys were adamantly clear on was that the media is jumping to conclusions about terrorism because the suspects happen to be Muslim.

And they repeatedly emphasized how Islam had nothing to do with the shooting, how we should replace “intolerance” with “forgiveness,” and how “as a primarily Christian nation,” the United States should be a place of compassion, not “bigotry and stereotyping.”