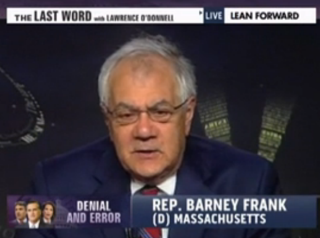 Rep. Barney Frank may find the 2012 Republican primary as wildly entertaining as most anyone else following the campaigns has, but he is still a little worried that the Democrats may suffer from this. This he told Lawrence O’Donnell on tonight’s The Last Word, where he explained that part of the blame for close-minded political rhetoric was voter demand, and that Democratic desire to cooperate has led to more gridlock in Congress.

RELATED: Barney Frank Goes After George Will Over Marijuana Legalization On This Week

O’Donnell opened the segment with a montage of claims from the Republican contenders, which he described by saying, “they always say what they are going to do as if they are running for king,” in “these simple declarative sentences.” “You can blame the candidates, and you can blame the media,” Rep. Frank responded, “but one party is [also] partially responsible, and that’s the voter.” He continued to argue that “understanding how to get the government to function, knowing how to make things work, is an important qualification for the job,” but voers often didn’t want to hear about it, “in the atmosphere in which we live today and probably in which we’ve always live, in which politics is a bad word.” Often, he concluded, “the public does not want you to talk about one of the most important parts of the job.”

He then turned to the Democrats’ behavior running the country, and lamented that President Obama “was too trusting of the Republicans” given “how right-wing the Republican Party has become.” “He said he would govern in a post-partisan manner; I got post-partisan depression,” Rep. Frank quipped. Admitting that the campaign has been “very entertaining,” he concluded with a slogan suggestion for 2012 Democratic candidates: “we’re not perfect, but they’re nuts.”