Bashir: Mitt Romney Was The ‘Leader Of The Gang’ That ‘Maliciously’ Hazed Gay Classmate 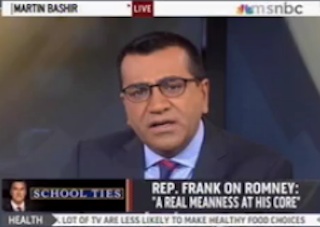 “Clearly, it was bullying,” said Bashir, later adding that Romney “was actually the leader who maliciously targeted this young boy and then took scissors to his hair. He is not in the gang. He is the leader of the gang.”

“Yeah, that incident in particular, it’s violent,” The Washington Post‘s Jonathan Capehart acknowledged. “It’s physically violent, it’s emotionally violent, especially in high school when kids are just trying to figure out who they are and how they fit in and where they fit in in the grand scheme of things. To have something like that happen to you, Mr. Lauber never forgot it, those other guys never forgot and I find it hard to believe that Mitt Romney forgot it. The thing that resonates so many for people about this story, it’s not so much what happened and who was involved. It is the fact that we have read these stories as recently as last month. There’s a movie out now called Bully, by Lee Hirsch. There are teens in small cities across the country who have faced bullying for one reason or another. It doesn’t matter whether the kids are gay or perceived to be gay but they were perceived to be different in some way. It was happening when Mitt Romney was at Cranbrook. it is happening to million of kids right now.”

“This speaks, does it not, to this man’s character and also the way he responds which is to simply drag out his wife again,” Bashir observed. “I mean, throughout the campaign he says, ‘Ann speaks better than me. She defends my position better than me.’ And then when he has to confront a story like this, he says, ‘well, I changed when I met Ann!’ It is almost as if Ann Romney is his messianic savior.”

“This would be a great moment for Mitt Romney to come out and say, ‘I was a part of that, too,'” Mother Jones’ David Corn argued. “I did something terribly wrong and I apologize. But this sort of dodging. ‘I didn’t know he was gay but I don’t remember.’ That is what I think the problem is here. And then ducking behind Ann’s skirt, as you note. So it could easily be put behind him if he was just up front about it. If he was a man about it, as one might used to say. And he is not doing that.”

Watch Bashir lash out at Romney over the allegations below, via MSNBC: